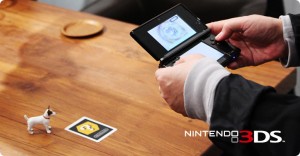 Iwata Asks – Lots Of 3DS Talk, Possibility About 3D Recording On The 3DS

Miyamoto: …The basic elements of Nintendo 3DS build upon those of Nintendo DS, so simply updating to the newest technology would naturally improve upon the graphics. The resolution would go up and the depictive capabilities would go up. In other words, we could create lots of images and display them. But if we just made a product with evolved graphics for creating pretty pictures, the product would end up being a machine anyone can create. …So if we could create lots of images, I thought it would be good to create some for the right eye and some for the left eye. And because the resolution of the liquid crystal was improving, it would be easier to deliver those images to the right and left eyes separately. I thought that would fit into the project extremely well.

Itoi: And you strongly felt that you couldn’t do 3D with goggles. (laughs)

Miyamoto: That’s absolutely true. Suppose ten percent of the total number of users bought goggles as an optional accessory. Then you’d be making 3D games for only that ten percent of users.

Iwata: Miyamoto-san spoke very clearly about that timing. He was quite passionate in claiming “We gotta do it now!” He was very persuasive.

Iwata: At the exact time that Nintendo was going to bring out a new handheld gaming device, the quality of images rendered in real time by game consoles had gone up, liquid crystal resolution had increased, and the ability to deliver separate images to the left and right eyes had all improved, so there was no question that the time had come.

Itoi: I see. It wouldn’t have been possible if all that hadn’t aligned with Nintendo’s timing for bringing out a handheld.

Iwata: Right. And we could propose it precisely because it was a handheld. If all this had arisen when we were working on a home console, it probably would have ended up as an option.

Itoi: In other words, if you had added it to a home console, it would have just become another “fun toy.”

Miyamoto: Right. No matter how you looked at it, the timing was right and it all came together perfectly. I thought it was time to make our move, unless we would encounter some huge technological difficulties.

Iwata: The idea of 3D Depth Slider solves several problems posed by 3D. As soon as that idea came up, a programmer made a prototype of it in a form similar to regular sound volume control. It was good, so we included it in the product.

Itoi: It really made sense when I tried it. Like Miyamoto-san said, inputting numbers wouldn’t have worked.

Itoi: I can really understand that. When you adjust the settings on a digital camera to take a picture in a particular way, you usually have to do it with numbers. That isn’t very helpful.

Miyamoto: I know what you mean. When zooming, for example, it’s easier to get what you want by grabbing the zoom lens and turning it than it is by pressing a switch and having it zip in or out.

Iwata: Other than analog input accompanied by immediate analog results, you can’t adjust anything very correctly. Even if there’s a function that allows you to make adjustments on a certain screen, there isn’t much point.

Iwata: Well, the Nintendo 3DS cameras are small, and don’t possess particularly amazing resolution compared with a regular digital camera, so some might not think it would cost much to put in one more, but there’s a big difference between one camera and two.

That’s because, in order to take a proper 3D photo, the optical axes for both have to be perfectly aligned and facing the same way. The precision necessary when compared to having just one camera is completely different.

Itoi: Oh, I see. Iwata: If the angles and axes of the two cameras aren’t in line with each other, they aren’t of any use as cameras for taking 3D photos. People in charge of manufacturing must have thought that this would be the biggest challenge for them for the mass production.

Miyamoto: If the axis is off a bit for just one camera, you just take a photo in line with that.

Itoi: I doubt the users are aware of all your hard work. (laughs)

Miyamoto: But Iwata-san also wants to include 3D video in the future! (laughs)

Iwata: I think it will be fun if we’re able to include video recording capabilities with future updates.

Itoi: I have no idea, but when you take 3D photos and videos, is there some kind of capacity limit?

Iwata: An SD card goes in this slot. Itoi: Oh, an SD card! Like two gigabytes?

Iwata: It comes with a 2-gigabyte card, but you can, for example, use a 32-gigabyte one as well.

Itoi: Oh, okay, I see. So you seriously can take as many as you want.

Itoi: Will this shift toward 3D continue? Will everything become 3D?

Iwata: I don’t know. As a maker of entertainment, I would say that our job is to surprise people, so if in the future, images that jump out of the screen stopped surprising people, I don’t know that we would make everything jump out.

Miyamoto: Even now, I don’t think we need to have everything stick out. One thing I’m certain of is that in games today, there are quite a few scenes that would be much better if they stuck out. They’re not interesting simply because they stick out.

Miyamoto: As a maker of Super Mario Bros. (laughs), I feel the same way. Depending on the situation, there are times when I definitely want something to stand out. Take, for example, when Mario faces away from you and bounds down to lower levels in certain terrain. It’s hard to judge the space between levels when they appear flat.

Iwata: If you show it two-dimensionally, you can’t distinguish whether the floor is high or low, or whether it has depth.

Itoi: Oh, I see. Miyamoto: But when it jumps out, it becomes quite clear.

Iwata: So, you know, doing something like hitting blocks floating in midair will become much more intuitive than before.

Miyamoto: Right. Lots of new forms of play appear. Itoi: And when you say “jump out,” you mean more than just the visuals, right?

Konno: And with Nintendogs + Cats, when you’re using StreetPass and exchange data with someone, in walk mode, that person’s Mii is walking whatever puppy he or she has chosen. Then your Miis and puppies talk and exchange gifts.

Itoi: I imagine you have experienced this Miyamoto-san, but when you’re with your dog, people look at the dog first. When I’m walking my dog, people in the street are like, “Oh, Bouillon (the name of Itoi-san’s dog)!”

Konno: So this time, we included the Street Pass within the Nintendo 3DS system itself, rather than having it just be in specific games. Now, for example, when you play a game like Nintendogs or Animal Crossing or Pokémon, if you turn StreetPass on, you will exchange game data with other users five, six, seven times for multiple games just by walking around with your Nintendo 3DS.

Itoi: So game data for each of the games I play is in the system, and, if StreetPass is on, every time I pass someone, it exchanges information for all those games all on its own?

Konno: For example, suppose you haven’t been playing Nintendogs + Cats for about one month. Game data from when you played before, however, is stored in your Nintendo 3DS. Then when you play the game again, a new puppy has come, and it has a present for you! Things like that will happen.

Itoi: Wow! I’m not sure how to describe it, but it’s not just realism—it also has an element of fantasy.

Iwata: I’ve been thinking that if we could put that into words, we would be able to explain the Nintendo 3DS system’s appeal.

Itoi: Ambiguous boundaries are the key. You can say that about anything, like virtual worlds, that draw upon the power of our imagination. Put an unusual way, I think that ambiguous world is like the Otherworld. We live in this world that we think is the real one, so if something from over there enters here, this world becomes unstable. That is at times frightening, at times thrilling.

Iwata: Ahh, the boundaries break down. We can relax only when there are proper boundary lines.

Miyamoto: If you don’t do anything, the game is complete in itself, but if you pass in the real world, the result shows up in the game, which is exciting. It’s also interesting how even though the network is so widespread, if the users don’t actually pass each other, nothing will happen. We may be going against current trends, but similar to what Itoi-san said, it would be nice if the commonplace experience of communication through people actually meeting spread through entertainment.