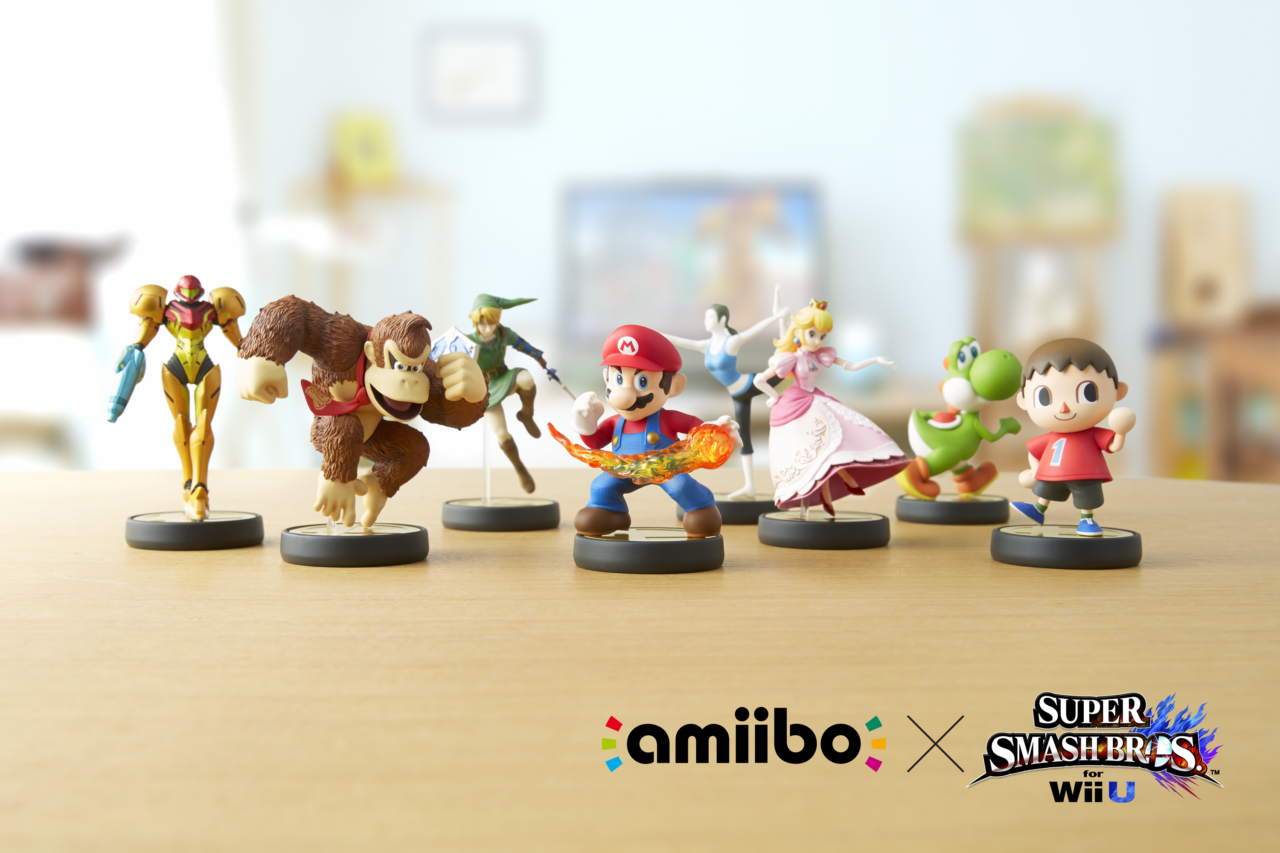 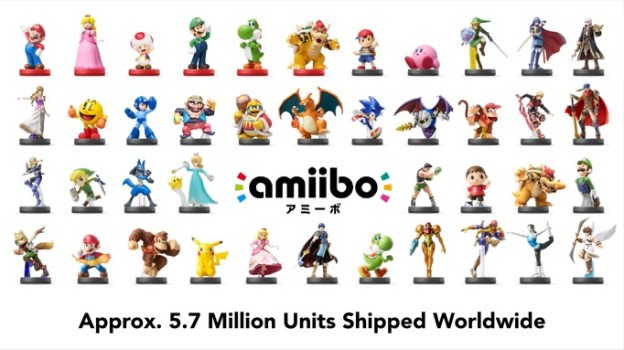 We also launched amiibo, our new category of products, at the same time as “Super Smash Bros. for Wii U.”
We had already shipped 5.7 million units worldwide by the end of last year.
amiibo is performing especially well in the U.S., Canada and Australia. Some figures are sold out and are being sold at online auctions at premium prices – something which none of us had predicted.

I can say that amiibo has kicked off smoothly, as it is a brand-new product category, launched with a much lower recognition rate than other action figure related proposals from other companies. 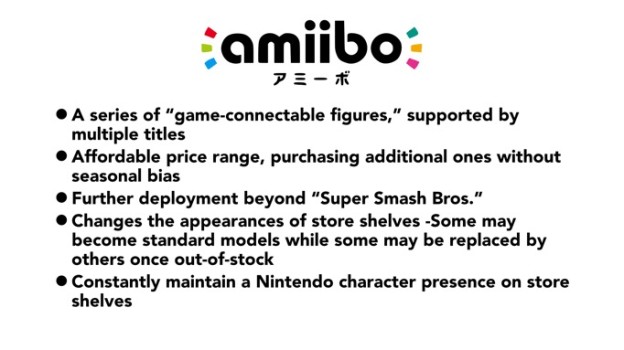 First of all, amiibo is a series of “game-connectable figures” supported by multiple titles.
“Super Smash Bros.” was the first title to support amiibo, followed by “Mario Kart 8,” “Captain Toad: Treasure Tracker,” and “Kirby and the Rainbow Curse.” We are planning further compatibility in various software titles.
amiibo is offered at a more affordable price range than packaged game titles, so consumers may feel the hurdle has been lowered to buy them one by one without seasonal gaps. In fact, considering the recent sales, amiibo has shown a smaller decline after the year-end sales season in various markets in the world than packaged titles. Also, I think amiibo can contribute to maintaining active use rates of Nintendo platforms by periodically bringing fresh topics to the applicable software through releases of new amiibo figures.
The first amiibo series after “Super Smash Bros.” will be “Super Mario,” which is compatible with “Mario Party 10.”
We are going to add various changes to the appearances of amiibo store shelves including the “Super Smash Bros.” series. As store shelf space is limited, some amiibo may become standard models while others may be replaced once they sell out.
If this is possible, amiibo will maintain a constant presence in stores, which will be beneficial for all Nintendo platforms. 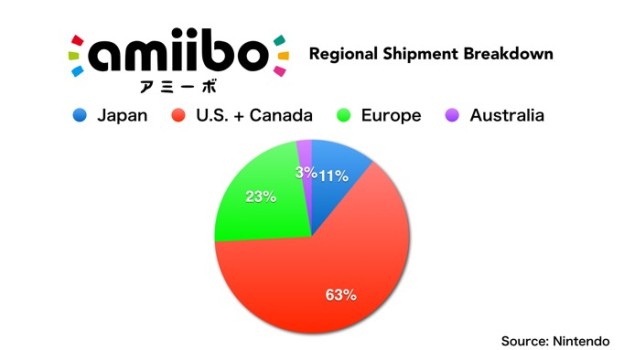 This is a pie chart indicating the regional shipment breakdown of amiibo from its launch until the sixth week of this calendar year.
As you can see at a glance, the sector in red representing the U.S. and Canada accounts for a significant portion: 63 percent. The sell-through proportion of the total shipment is approximately 70 percent in each of Japan, U.S. and Canada, and Europe while it reaches 90 percent in Australia 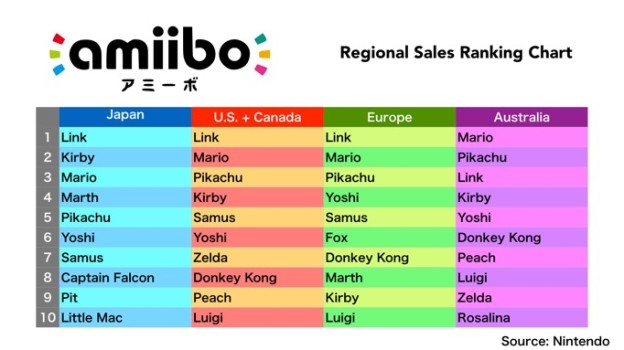 This is the regional top sales ranking chart of each amiibo figure. This does not perfectly represent the popularity or demand for each character because some amiibo were out-of-stock in some regions, but you can certainly see some regional differences in the sales trends. 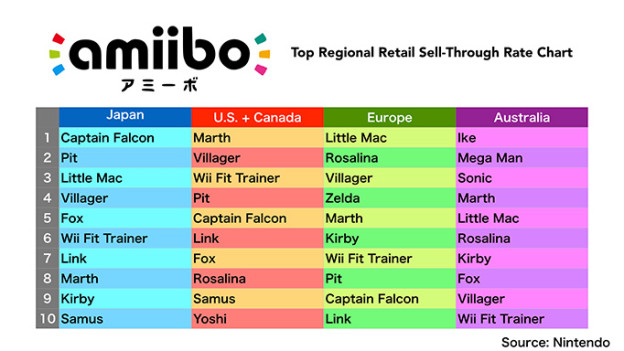 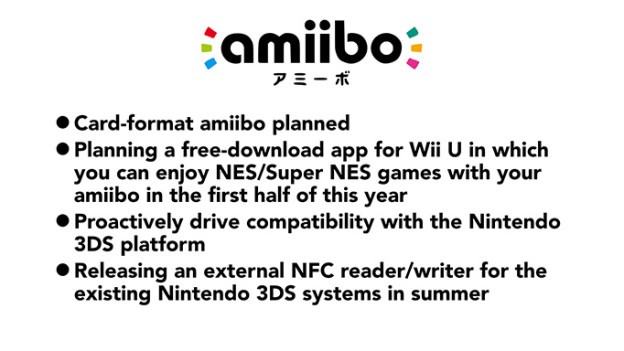 In contrast to the current figure-shaped amiibo available, we will make amiibo in the form of cards this year as one of our future plans as Mr. Miyamoto mentioned at the Corporate Management Policy Briefing in October.
We are also planning a free-download app for Wii U in which you can enjoy NES and Super NES games with your amiibo in the first half of this year.
With this app, once you tap your amiibo on the NFC area of the GamePad, you will be able to play highlighted scenes of one certain title for NES or Super NES. You cannot play the entire game due to a time limit, but another tap of the amiibo will enable you to try another highlighted scene in the game. We hope that when you tap your amiibo, the quickly changing game scenes will pleasantly surprise you and make you feel as though you have just exchanged a game cartridge.
Even though only Wii U has been compatible with amiibo so far, we are making steady progress on compatibility with the Nintendo 3DS platform. New Nintendo 3DS is equipped with NFC as a standard feature. For existing Nintendo 3DS systems, we will release an external NFC reader/writer in summer this year. On the software side, “Super Smash Bros. for Nintendo 3DS” started to support amiibo after a software update in February.