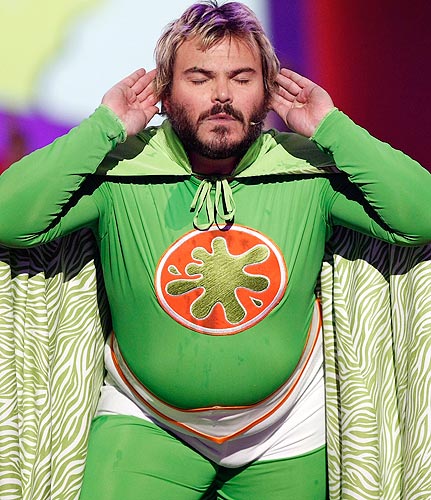 New York, NY, December 2, 2008 – On Sunday, December 14th, the future is in play when Jack Black, one of the entertainment industry’s most versatile and talented stars, takes viewers on a trip to gamer heaven as host of Spike TV’s 2008 “Video Game Awards.” Recognizing outstanding artistic and technical achievement in the gaming industry, plus premiering first-looks at the hottest games of 2009 and beyond, the 2008 “VGAs” debuts LIVE and in HIGH-DEFINITION on Sunday, December 14 (9:00-11:00 PM, ET/tape delay on west coast) from Sony Picture Studios in Culver City, CA.

In emceeing the night’s festivities, Black will be capping a 2008 which saw him star in two Hollywood blockbusters, “Tropic Thunder” and “Kung Fu Panda” that grossed over $800 million worldwide combined. Also, he will star opposite Michael Cera in director Harold Ramis’ June 2009 release of “The Year One.”

“Jack is a huge gamer and a former performer and winner on the ‘VGAs’ having taken home Best Performance By A Human – Male in 2005,” said Casey Patterson, Spike TV’s senior vice president, event production and talent development. “We’re thrilled to have him as our host. With a record 10 world premieres including Brütal Legend starring Jack, it will be a big night and wild ride!”

In addition to the world premiere of Brütal Legend gameplay from designer Tim Schafer (Grim Fandango and Psychonauts) and Double Fine Productions, the 2008 “VGAs” will be stacked with an unprecedented number of wall-to-wall world exclusives. Games scheduled to make their global debut include the first look at the gameplay of the PlayStation 3™ exclusive God of War III, Uncharted 2, EA’s Sports Fight Night Round 4, Mafia II, Terminator Salvation, Watchmen: The End is Nigh, a special announcement regarding Gears of War 2 and more blockbuster surprises set to be revealed shortly.