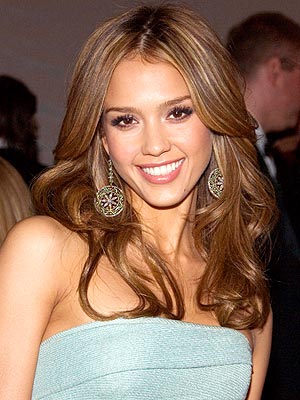 Jessica Alba was recently interviewed by Yahoo! and they asked her about her thoughts on both the DS and Wii:

Yahoo: Did you get a chance to play the games you were in?

Jessica: I have played both of those games, but I don’t last very long. I get frustrated. I just got the Wii and that’s fun. I play all of the Wii Sports games, like bowling, tennis, and baseball. That’s a lot of fun.

Yahoo: You mentioned recently getting the Nintendo Wii — what do you like about it?

Jessica: I think the physicality of the Wii gets people off the couch. Sometimes you can just sit there playing a video game for hours and never move and you’re brain is just zapped from playing the game. With the Wii, you’re up on your feet and moving around. The physical aspect of it is great, especially for kids. They actually call it the Wii Diet, since active players can burn calories!

Jessica also had a bit to say about the DS…

Jessica: I had my DS on the set of Fantastic Four and I bought it for my entire cast when we wrapped,” said Alba. “I guess I just felt bad because between takes they’d be chatting and we were in the Fantasticar and I’d always have my iPod and my DS with me. It was like fingernail-biting, gripping moments in the movie and then, “Cut!” I’d pick up my DS and try to beat my 82 age in Brain Age. I’d try to memorize all of those damn words.

I would play my Wii with her in a New-York minute!