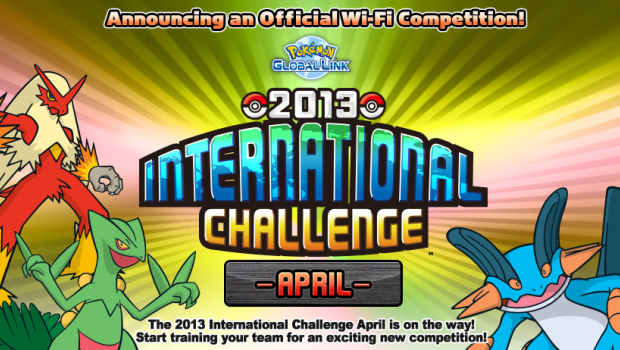 Last day to sign up for the 2013 Pokemon International Challenge April!

Attention all Pokemon Masters (or prospective Masters), today is the last day to sign up for the 2013 Pokemon International Challenge!  The Pokemon International Challenge is the official Pokemon battle tournament, hosted using the Pokemon Global Link system, which allows players from around the world to compete with each other.  To join the competition go the Official Site and follow the link to sign up!

There are three age divisions: Junior division, born 2002 or later,  Senior, born 1998, 1999, 2000, or 2001, and Masters division for those born 1997 or earlier.  This part of the competition makes me feel like an outlier in the Pokemon market, because I am not even CLOSE to being in any other division besides the Masters.

The competition is hosted completely wirelessly, so you are able to jump on the Global Link when you are available to play your tournament matches between April 19 and April 21.  Players must complete at least 5 matches to be included in the rankings, but you may complete as many as you like.  Also, make sure to complete your matches in a timely manner, because players that disconnect or don’t finish their matches could potentially get banned from further competitions.

There a bunch of specific rules on the site, which you should check out before you sign up.  This is an exciting competition, and anyone interested should sign up before it closes later today.  Good luck to all involved!