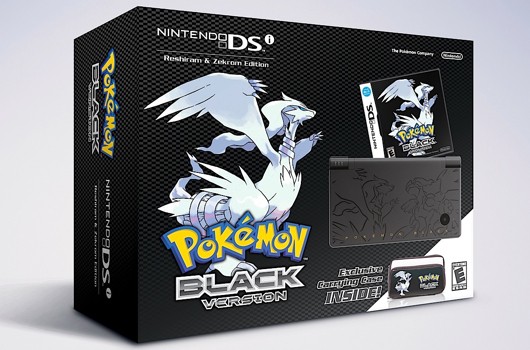 I don’t comment on press releases very much, but I can’t help saying something about this. Unless you are a super big Pokemon fan, it wouldn’t be super wise to buy this bundle with the 3DS coming out right around the corner. Well I guess if your not planning on buying the 3DS…but you would just be crazy.

The black system bundles will be packaged with the Pokémon Black Version game, while the white system bundles will be packaged with a copy of the Pokémon White Version game. Both the black systems and white systems will feature the new Legendary Pokémon Reshiram™ and Zekrom™ etched onto the casing. Reshiram and Zekrom are among the more than 150 never-before-seen Pokémon introduced in Pokémon Black Version and Pokémon White Version. The bundles will also include a custom Pokémon Nintendo DSi carrying case. Each bundle will be offered at a suggested retail price of $179.99.

The individual Pokémon Black Version and Pokémon White Versiongames will launch on March 6, and are now available for pre-order from major retailers throughout North America for a suggested retail price of $34.99 each. A deposit may be required for pre-orders. See individual retailers for details.