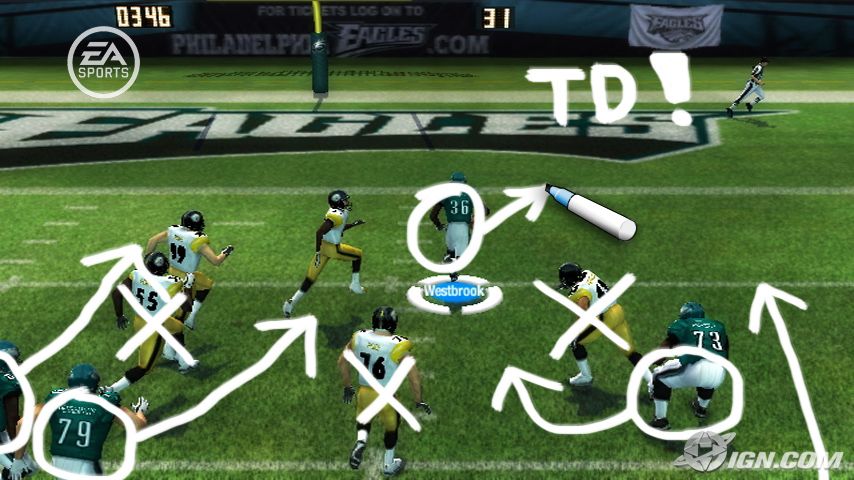 IGN Wii: Does Madden support voice chat or any type of online communication? Also, will players need friend codes to hook up, chat, and play?

Damian: Madden Wii does not support voice chat this year. We do have a basic EA Messenger chat service which allows you to keep connected with friends during online play. EA Messenger is separate from the Wii friends list so when you’re online you search for people by using their online EA Nation Persona.

IGN Wii: Does the online mode automatically import your system code, or do you need a separate friend code to play Madden online?

Damian: Madden Wii doesn’t support the Wii friends system during online play. This is something we’re still working on with Nintendo. For now our online play uses your EA Nation Persona to search and manage your EA Messenger account.

IGN Wii: How many of the game modes are multiplayer enabled? Can you play all mini-games, tournaments, and modes on and offline? Are there any online seasons/tourneys for the Wii version?

Damian: Pretty much all of the standard offline game modes are local multiplayer enabled. Social gaming is the big push for us this year with the inclusive of Party Mode and Online Play. We don’t support online tournaments this year. However this is something we’re looking at for next year. With this being the franchise’s first year online on the Wii we have concentrated on delivering the core Madden gaming experience at a high quality.

IGN Wii: Has there been any DS-to-Wii integration for this game for play calling or create-a-play modes? If not, can you use the Wii remote to draw out plays in your playbook?

Damian: No DS-to-Wii integration this year but there’s always next year. When it comes to drawing with your Wii remote, however, we have got the feature for you. Madden 08 has an all-new Telestrator feature available in Party Mode this year. Basically Telestrator allows you to draw on screen during earned auto-instant-replays after big plays… so you can humiliate your opponent both vocally and visually this year moments after embarrassing your opponent with a punt return for a TD. It’s been an office favorite and we’re sure it will please those that enjoy heated competitive battles against their friends. Madden 08 Wii delivers John Madden’s number one tool of his trade right into the palms of your hands. The possibilities are endless to say the least.

Read the rest of the interview here