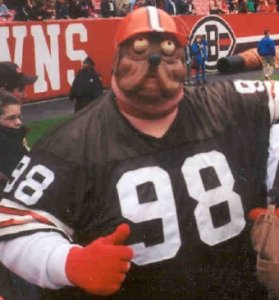 The Cleveland Browns may be struggling this year but their fans will always be there for them.  Anyone who follows football will recognize this man, he has appeared in almost every Browns highlight reel. Fans aren’t the only ones recognizing this guy, EA has too and they added him in this year’s Madden game. Apparently, this Browns fan didn’t like that and is now suing for $25 million in damages.