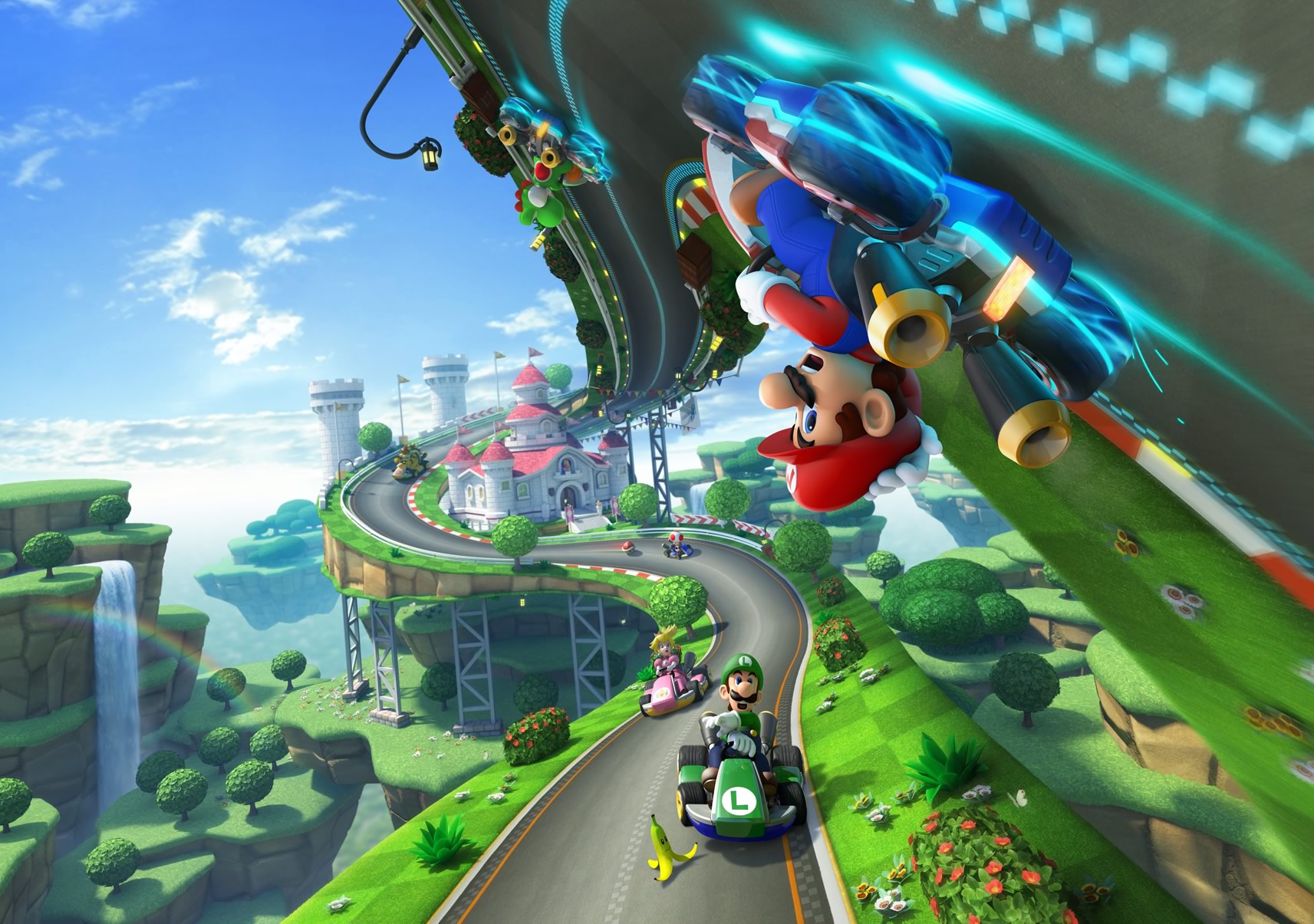 Nintendo just raced into our hearts and released a lot of good information about Mario Kart 8. Let us not waste time and get to the Direct above and the press release below.

REDMOND, Wash.–(BUSINESS WIRE)– One month from today, Mario Kart 8 will be driving players wild with anti-gravity racing action. To get people revved up for the Wii U game, Nintendo released a new Nintendo Direct video that announced some additional news nuggets, including a Mario Kart 8 Wii U bundle, a free downloadable game offer for Wii U owners who buy Mario Kart 8, details about online features, cool new characters and devastating new items.

“Everyone loves Mario Kart,” said Scott Moffitt, Nintendo of America’s executive vice president of Sales & Marketing. “It’s a franchise that brings people together for fun at a family gathering, a frenzied race against friends or just an afternoon break at the office. The numerous new features of Mario Kart 8 make this the most ambitious version yet, and one that will have players of all skill levels racing for the checkered flag.”

To view the Nintendo Direct in its entirety, visit http://www.nintendo.com/nintendo-direct. Some of the new information announced today included:

Get a Free Digital Game: People who buy Mario Kart 8 and register the game with Club Nintendo before July 31 will receive a free Nintendo eShop download code for an additional Wii U game. Players can grow their Wii U digital game collections by choosing from one of these well-received Wii U games: New Super Mario Bros. U, Pikmin 3, The Legend of Zelda: The Wind Waker HD or Wii Party U. That’s a two-for-one deal featuring some of the all-time great Wii U games. This offer also applies to people who get the game in the Mario Kart 8 bundle or digitally in the Nintendo eShop.

Online Multiplayer: Up to 12 players can race together online in four different multiplayer modes, as long as everyone has a broadband Internet connection. Like to trash-talk your friends while you’re preparing for a race? You’re in luck! Mario Kart 8lets players chat with one another in the lobby area using the Wii U GamePad microphone or text phrases as they wait for their friends to join. Players also can create public or private tournaments for which they specify the day of the week, the time and the rules. Per tradition, players will be able to race against ghost data from friends or even the top 10 worldwide racers. They can try to beat them or just pick up a few tips and tricks from studying the best. If you beat the development team’s ghosts, you’ll get cool stamps for use in Miiverse posts.

Mario Kart TV: As previously announced, players can watch their highlight racing reels, rewind them, play them in slow motion or upload them to Miiverse. They can watch the world’s most popular highlight reels and comment on them. But players with Google accounts can also upload their reels directly to their YouTube channels.

New Items: Items are what make Mario Kart games so balanced. No matter how skilled racers are, they’re just a blue Spiny Shell away from disaster. A well-timed item can also turn defeat into victory in an instant. The new Super Horn blows away all other items – literally. Sounding the Super Horn issues forth a sonic shock wave that blasts away everything in the vicinity, including other drivers, Red Shells and even blue Spiny Shells. It’s a potent asset, especially for drivers trying to maintain their lead. Mario Kart 8 also introduces the Crazy Eight, a swirl of eight different items that lucky players can use one by one.

New Racers: Two new playable female characters make their debut appearances in Mario Kart 8. New heavyweight driver Pink Gold Peach glows with a golden light and makes a nice counterpart to Metal Mario. Baby Rosalina shows up for a play date with other Baby characters. As in past Mario Kart games, players can again choose to play as their Mii characters, which rounds out the field of racers to an even 30.

Mario Kart 8 is now available for pre-order at major retailers throughout North America. A deposit may be required for pre-orders. See individual retailers for details. For more information about Mario Kart 8, visit http://mariokart8.nintendo.com.