Mass Effect™3 plunges you into an all-out galactic war to take Earth back from a nearly unstoppable foe – and how you fight that war is entirely up to you.  Groundbreaking interactive storytelling drives the heart-pounding action in which each decision you make could have devastating and deadly consequences.  You are Commander Shepard, the only one who can save Earth from annihilation.  But you are not alone.  At your side is a team of elite, battle-hardened soldiers ready for your command.  Flank enemies with your squad or take them down lone wolf.  Use cover or go in guns blazing.  Unleash tactical assaults from a distance or go toe-to-toe with enemies using devastating melee assaults and the deadly omniblade.   Coming later this year, the war for Earth begins on Wii U™. 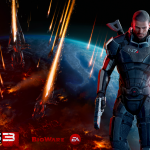