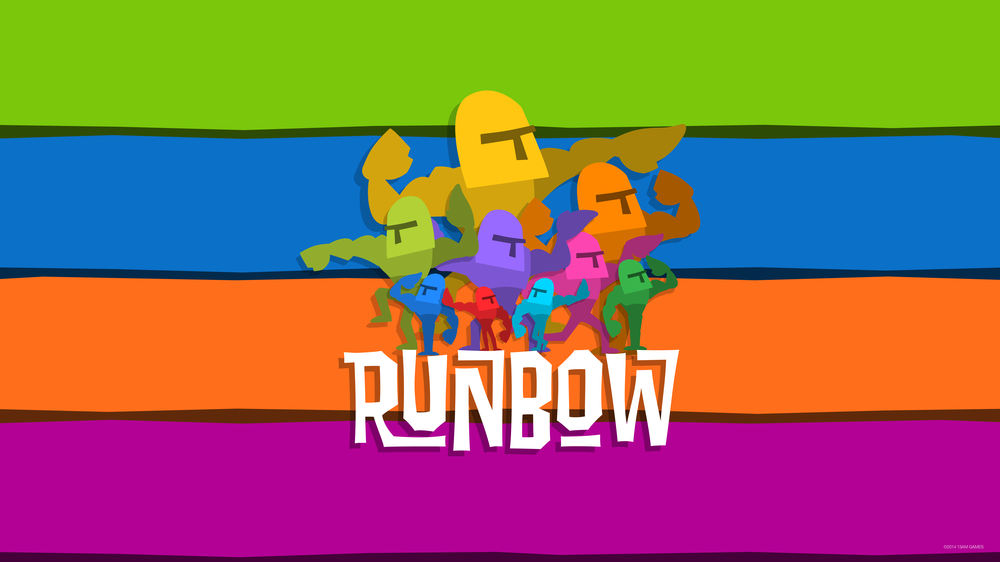 Nintendo’s long line of indie developers continues to grow, as does the interesting array of games they produce. Runbow is another unique game that brings a first to platforming by allowing up to nine local players to join in at once. Yes, nine.

Indie studio 13AM Games hail from Toronto, with a team of nine developers – conveniently the perfect number for playing Runbow. The team came up with the idea in January while participating in the Global Game Jam. The team produced a crude 8-player PC prototype of Runbow in a single weekend, which is still playable on the Global Game Jam website.

The concept behind Runbow is a simple one, with players racing through stages that consist of shifting background colors. When a platform or wall is the same color as the background, it temporarily ceases to exist. The Saul Bass-inspired art style helps to distinguish between the many players on screen.

After the Global Game Jam, the developers researched which platform would suit their concept for further development. When the team discovered that they could tether Wii remotes to Wii controllers, and throw in the GamePad to garner nine players, it was decided – the Wii U was the platform for them.

We had some reservations when we first put nine players in because the beginning of the level became extremely frantic. All this mayhem breaks out! It’s been really challenging, but getting nine-player local multiplayer makes it all worth it.

The team have even made use of the GamePad by giving that player control of level elements to become the ColorMaster.

Another new feature will see players receive powerups. The powerups vary in value depending on your position – a little like Mario Kart – although in Runbow, those in first place won’t just get useless items, they could get a power-up that actually sets them back. It’s all in an effort to keep the game fun for all nine players.

13AM Games are working towards a Wii U release sometime next year, so there’s plenty of time to fine-tune the dynamics of nine players on screen at once. In the meantime, check out the announcement trailer above, and let us know if you’re intrigued by this interesting gaming concept.