You’ve never played sudoku like this before. Two players, one puzzle! 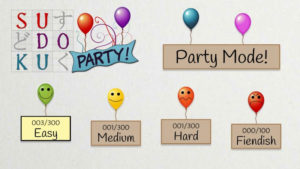 Sudoku Party’s greatest strength is maintaining the traditional solitary experience of Sudoku, with the additional feature of co-operative gameplay.

Right from the start, the game offers 4 levels of difficulty: Easy, Medium, Hard and Fiendish. Each difficulty has 300 puzzles, with the exception being Fiendish which has only 100. You can play alone, or have a friend jump in at any time. At the end of each puzzle, you are ranked using 1-3 balloons which represent these three tasks: solving the puzzle, doing so within a specified time limit and not using any hints. This presents an opportunity for replay to try and collect all the balloons. 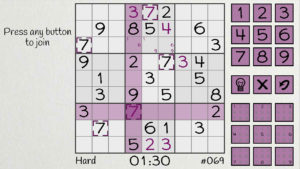 Party Mode is specifically made for competitive multiplayer. Although you can’t choose the difficulty of the puzzle, this mode is plenty hard enough due to having to think faster than your opponent. If you place the correct number on the chart, your opponent is given the opportunity to snag a point before time runs out by inputting the correct number. If you get a number wrong, your controls are locked and you must wait a few seconds before resuming play. 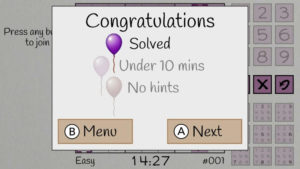 Overall, I really enjoyed this game and can only find one real negative, being that there is only one song in the whole game that continuously loops. However, the song is incredibly catchy with a ‘dojo’ feel, and you can easily turn off the volume if it is annoying.

In conclusion, Sudoku Party is creative and I can’t imagine playing Sudoku solo after experiencing this game. For $5.00, you have a whopping 1,000 Sudoku puzzles inside a simple fun game. I would highly recommend it.

Sudoku Party is creative and I can’t imagine playing Sudoku solo after experiencing this game.