Totes the Goat is a “modernized vision of classic and beloved arcade gameplay”, in this case, Q*bert. The spirit of that coin-op hit (a favorite of mine) lives on in this mobile port from Atooi. How does Totes turn out on the Nintendo Switch? 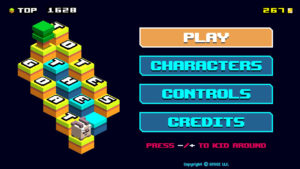 There’s not a whole lot to this game, reflected in its modest $4.99 price. There are no leaderboards, just a single high score. There are plenty of characters to unlock besides the titular billy, but it doesn’t take very long to do so. Each character plays identical too, only offering some aesthetic adjustments. If you enjoy early arcade gameplay, Totes the Goat delivers on that end. However, much like those games, depth and replay incentives have limitations. 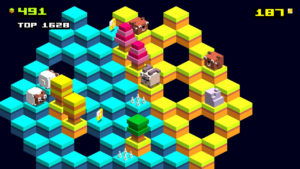 Totes looks alright for what it’s aiming for. I rather like the voxel art, and the use of color. Some light background animation or imagery might’ve been nice though, as solid black is a bit dull – though it does mean you won’t be distracted. Experimenting with each character to see how the terrain subtly changes was fun for a bit. 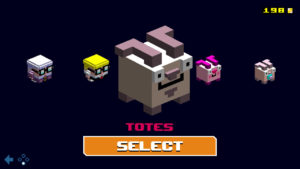 The random nature of the levels helps stave off boredom. But it also means that the difficulty curve can be pretty random as well. In some games, the tough enemies (Wily Wolves that alter your changes) won’t appear until late, but other times they’ll show up almost immediately. Watch out for enemies dropping from above too, especially at times when the camera will move to reveal more of the playfield. Low visibility, combined with their light shadows, can make them easy to miss until they’re upon you.

Totes the Goat is decent. As a mobile port, I would’ve liked seeing Atooi add some light enhancements. Mild background imagery, a few different music tracks to pick from, or even local leaderboards, these would’ve been welcomed. But Totes still scratches that retro arcade itch. Maybe check out the mobile version first if you’re in doubt. If you enjoy it, $4.99 isn’t that much to pay for an ad-free experience with button controls.

Totes the Goat is decent. As a mobile port, I would’ve liked seeing Atooi add some light enhancements. Mild background imagery, a few different music tracks to pick from, or even local leaderboards, these would’ve been welcomed. But Totes still scratches that retro arcade itch.