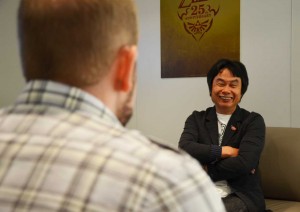 GI: Nintendo attempted handheld/console connectivity in 2001 with the GBA/Gamecube link cable. Sony is going for something similar with the Vita. Why is Nintendo now choosing to make the highlight of its console a controller with a screen built in?

SM: We’ve tried connectivity in the past, and we have a lot of different game ideas based on the experiments that we’ve done before. Even looking at the connectivity that we did back then — even if all you needed was a single cable to connect — you’d have people who had that cable, but you’d have people who didn’t have it. Of course, we were looking at connectivity in the sense of having a home console and then a portable, and having to have both of those. What that ends up doing is limiting the audience that you’re able to reach with the content that you’re providing because you have to own both and not everybody would.

So really what we were looking at this time was more how can we create this stable environment both for Nintendo itself and for third-party developers so that there’s one target environment that they’re developing for that allows them to create an experience that leverages the full capacity of that environment without having to worry about whether or not everybody has everything they need in order to enjoy that experience. So that’s why when you look at Wii U we’re offering that as a set structure where you have the new controller with the screen, you have the console, and everybody who buys the console is going to have that. It makes it easier for development teams to ensure that they’re creating content that everyone can enjoy.

GI: Speaking of third-party development teams, with the Wii it seemed very few games were released for the console which included no motion control. Will Nintendo set a standard that requires all games on the Wii U to use the controller’s screen functionality?

SM: We’re not going to set any requirements in terms of how developers have to adapt the functionality of the controller to their games. I think what we saw most with Wii was that because the number of buttons on the controller was somewhat limited compared to what developers were used to developing for, that they felt that they needed to implement motion controls to allow for the variety of gameplay and the variety of actions that they would normally want. This time, if you take a look at the Wii U controller, what you’ll see is, yes, it does have motion control and it does have a touch screen, but it also has a full complement of buttons to go alongside that. So it’s really going to be up to the development teams to decide if they want to take advantage of button control, motion control, the touch screen, and they’ll be able to leverage their own creativity and find the gameplay style that’s going to be best suited to the games they’re developing.

GI: The original design of Super Mario World 2: Yoshi’s Island was originally rejected by Nintendo and sent back for revision, which prompted you to overhaul the game with it’s trademark pastel, crayon art style. Do you, a video game luminary, still ever have ideas that are sent back to the drawing board?

SM: Yes, that’s pretty common, actually. Part of the development research process is running different experiments and looking at them and trying to decide which ones are strong enough to be turned into retail products. The ones that aren’t are shelved and we may come back to them later and look at ways to bring them to life. It’s not just limited to art styles, but entire gameplay structures and gameplay systems.

Skyward Sword is another good example of that. That’s a game where we started the experiment based on the Twilight Princess game that really focused in on what the new gameplay styles are going to be, and those new interactions that we’re going to focus on in this game. We worked on a number of those and figured out which are the ones that we’re going to bring to life in a new game. In that process the games evolved. It wasn’t until we got to the point where we were able to evaluate those and really make a final decision. I was a little nervous about the game early on, but now it’s come along quite nicely.

GI: Nintendo has made clear that the Wii U controller is not a portable gaming device. Were there ever plans for it to be its own self-contained system that you could take with you?

SM: That’s a tough question. I guess what I should do is explain where the idea started from. The concept for Wii U came from, “where do we want to take the future of home console gaming?” Particularly with the thinking that the home console is something that’s connected to the TV, we started to think about how we can leverage the TV and interact with it in different ways and use that to change the living room entertainment experience. What we didn’t do is look at in terms of how can we connect a portable gaming device to a console.

One of the challenges with the home console is that up until now for the home console to function is it has to be connected to the TV. Particularly now when turning on the TV doesn’t instantly bring up an image, it takes time for the picture to come up, or someone else is using the TV, that then creates barriers for people to use the home console. What we thought was what can we do to make this device that anyone can access instantly at any time regardless of what’s happening on the TV? How can they use this controller to very quickly turn on the system, see what’s new there, see what their friends have been playing, and have instant access to that. What we decided is that in addition to the TV screen that the console is going to use, we needed an additional screen that is quick, easy access to everything that the system has to offer.

GI: The Zelda series is widely loved. But there are some criticisms that the series hasn’t evolved over the years. Now that we’re at the 25th anniversary, are you happy with what the series has become?

SM: The thing that we think is valued the most in the Zelda series is that the player isn’t just playing a game. The player is in that world and part of that adventure and using their own abilities to solve the puzzles and fight the enemies that are there. I think that’s really where we’ve put our focus on that series over the years. Possibly as a result of that there’s the tendency for the gameplay to feel a little bit more linear. Really what’s important for us is that satisfaction that you get from sitting down and thinking your way through those puzzles and finally solve them.

So the idea is that the player grows and matures over the course of the adventure, and one way to strengthen that feeling for the player is to have the adventure follow along with a flow and be very connected to a story that progresses as the play progresses through it. I think that’s where the structure or the order of the game comes from.

Of course, as the games evolved into the full 3D worlds, and more recently with the implementation of motion control, I think that sense that you’re the one in that adventure experiencing it has strengthened greatly. I think in that sense the Zelda series has really evolved.

The other thing that we did with the Zelda series is we intend to create the game in way that the player has a tremendous amount of freedom in terms of the things that they’re able to do. As they explore the world and discover things and try to play the game in different ways, there are little thing sprinkled throughout the world that will reward them for that. I do think that the notion of following a story perhaps pushes people towards that normal progression of the game. What I’ll say about Skyward Sword is that there’s a tremendous amount of places you can go and things you can do in that game. It’s very open world, and I would encourage everyone to go and explore every nook and cranny of that game as well.

GI: How similar is the hardware of the Wii U’s circle pads with the 3DS’s?

SM: The circle pads that we’re using for the Wii U controllers are of a more advanced state than the one we created for Nintendo 3DS. They will perhaps have a bit more precision. The mechanism that allows those circle pads to work is still very different from, for example, the mechanism we used for the control stick on the Gamecube controller. In that sense it’s very tough to compare the precision or how the circle pads will work in that sense, but personally I feel that we’ve gotten them to a point that when you sit down and play with them you get used to them very quickly and they feel very nice.

GI: I’ve heard rumors that Kirby was named after attorney John Kirby, the lawyer who defended Nintendo in a lawsuit by Universal during the 80s. Is it true?

SM: Yes, it is a fact that I met John Kirby and got to know him when he was defending us during the lawsuit against Universal. And it is a fact that the Kirby name was partially chosen in connection to him, but it wasn’t named after him. Instead, we had a list of names that we were looking at and Kirby was one of the names on the list. As we were going through the list and narrowing down the selections we saw that Kirby was there and we thought John Kirby’s name is Kirby, and started thinking that if those two had a connection that would be kind of funny.

Full interview with much more here