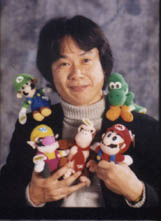 Time Magazine has ranked Mr. Miyamoto as the 4th most influential person, in there annul Top 100 influential people of the year. This is Miyamoto’s first time ever on this list. Here a little of what they say about him.

PRO: Most successful game designer, creator of Super Mario, Donkey Kong and The Legend of Zelda, whose new platform, the Wii, is currently the top-selling game console.

CON: His perfectionist tendencies often result in games being significantly delayed and, despite the Wii’s gameplay innovation, its graphics are far behind the competition.

UPDATE: Sorry I just realized that you can still vote for the most Influential man of the year.  Go to the source and vote Miyamoto to number 1