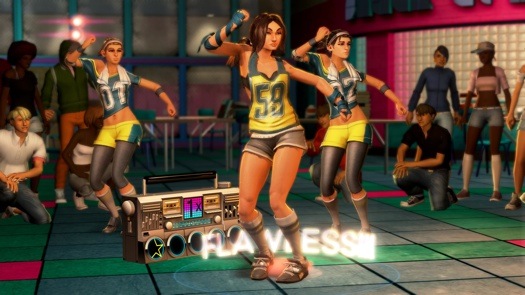 CAMBRIDGE, MA – Oct. 13, 2010– Harmonix, the world’s premier music video game developer, and MTV Games, a part of Viacom’s MTV Networks (NYSE: VIA, VIA.B), along with distribution partner Microsoft, today released the full list of songs and artists featured on the DanceCentral™ on-disc soundtrack. Completely free from any controller, every routine features fun choreography and authentic routines for beginners and experts alike of all ages to master, alongside a killer soundtrack that spans a great sampling of pop, funk, hip-hop, Latin and R&B artists, including Cascada, Kool & The Gang, Kylie Minogue, No Doubt, Salt-N-Pepa, Nelly Furtado, Christina Milian and more.

Dance Central, exclusive for Kinect™ for the Xbox 360® video game and entertainment system from Microsoft, will be available Nov. 4, 2010 in North America and Nov. 10, 2010 in Europe.

“We felt it was very important to launch Dance Central with a balanced selection of the latest, greatest and all-time classic tracks,” said Paul DeGooyer, Senior Vice President of Music, Electronic Games and Programming for MTV Networks. “The setlist on the disc really achieves that goal, offering everything from “jerking” to disco, from Rihanna to Young MC. Whatever your jam, we think you’ll find something to get you moving in this contagiously fun soundtrack.”

Beenie Man – “King Of The Dancehall”

Kylie Minogue – “Can’t Get You Out of My Head”

Technotronic – “Pump Up the Jam”

Dance Central will feature downloadable content beginning Nov. 4, 2010. Each song will not only deliver fresh music, but also completely new routines that will keep dance parties going for months to come.

Winner of the E3 Game Critics Best Original Game and Best Motion Simulation Game, as well as more than 30 additional awards and nominations, Dance Central is a controller-free dance video game with fun choreography for beginners and experts. Whether rehearsing in Break It Down or owning the dance floor in Perform It!, players will be introduced to more than 600 moves in the game and more than 90 dance routines created by professional choreographers. In addition, players can earn Achievements, unlock new character outfits and venues and progress through the dance ranks. In Dance Battle, players can challenge friends to an epic living room showdown.

The new Dance Central trailer is available for download in the following formats: