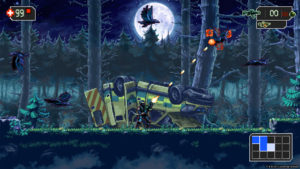 Remember when licensed games were good? WayForward’s The Mummy Demastered may be the first of many film-based games you actually want to play.

The Mummy Demastered takes place in the same dark universe reboot film series (the Tom Cruise one, not the Brendan Fraser one). As a nameless agent of Prodigium, you must venture a massive level to prevent the rise of Princess Ahmanet, a mummy with a serious death drive. 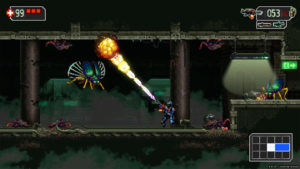 The game leans in real hard on its demastered namesake. Like many great WayForward titles, it scoffs modern 3D visuals for upscaled 2D pixel art. Like in many great Metroidvanias, you’ll explore, you’ll become stronger, and kill just about everything in your path. And unlike the caverns of Talon IV or one of Dracula’s many castles, every single room is infested with enemies. It gets downright annoying at some points but eliminates the sometimes empty feel Metroidvanias often suffer from. 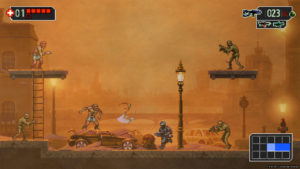 There are times when the challenge is needlessly tedious. Dying makes your agent reboot at your last save spot, but all your loot, energy packs, and guns are picked up by an undead goon. They’re easy to kill, but this added chore doesn’t add much and is more of an annoying roadblock. While there are plenty of save rooms to be had, none of them will fill your health bar. If you want to get ready for a boss fight, you’ll need to stand in front of an enemy spawn site and pick up pittances of energy. It’s the first Metroidvania I can think of that truly penalizes you for dying. 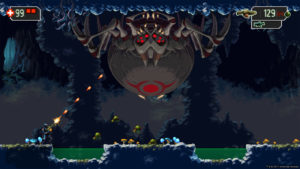 Once you reach a difficulty fork, tenacity alone won’t save you. You also need the patience to hunt down the zombie thief who stole your stuff plus kill enough small enemies to slay to refill your health bar. If a game ever starts feeling like homework, it’s usually not a good sign. Still, one gamer’s grind is another one’s joy.

What’s totally inexcusable is that cutscenes aren’t skippable. This makes the replay value plummet. This is especially annoying when losing out to the same boss more than once, having to suffer through Princess Ahmanet’s spiel about humanity before she lets you kill a monster. This, piled onto the rest of the tedium from above makes Demastered a bigger slog than it needs to be. 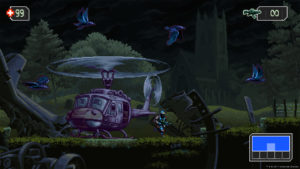 Outside of the flaws that only pop up if you really suck at video games (like me), it cannot be understated just how polished the rest of the game is. From the level design to the cutscenes—tedious as they sometimes are—are blockbuster quality. Digging for new upgrades and weapons is always satisfying, and easily the best Demastered has to offer. The 2D Metroids of yesteryear were fun, but did Samus ever have access to a flamethrower? She did not.

Dying in The Mummy Demastered reaches a Dark Souls level of pain. Minor tweaks may have made the game a little more palatable to the average gamer, but a welcome addition for Metroidvania fans who crave a serious challenge. The cure for all that ails The Mummy Demastered can be summed up in—as a wise man once said—“Git good.” Now while beginners should be wary, serious veterans will find too much not to love in this scary challenging Metroidvania.

Dying in The Mummy Demastered reaches a Dark Souls level of pain. Minor tweaks may have made the game a little more palatable to the average gamer, but a welcome addition for Metroidvania fans who crave a serious challenge.