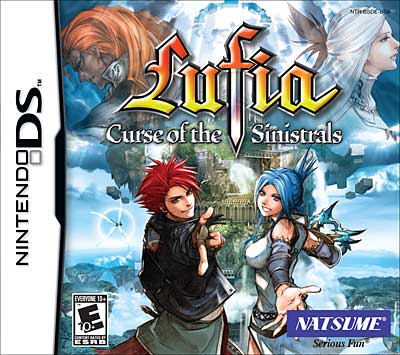 Burlingame, Calif., October 13, 2010 – Natsume, a worldwide developer and publisher of family-oriented video games, announced today that
Lufia: Curse of the Sinistrals is now available at retail for the Nintendo DS for an MSRP of $29.99. The game is rated E 10+ by the ESRB.

“Lufia is back and it’s better than ever!” said Hiro Maekawa, President and CEO of Natsume. “With its exciting, fast-paced battles, mind-bending puzzles, and deep, moving story, Lufia: Curse of the Sinistrals is an action RPG experience that no DS owner should miss!”

After many years away, the Sinistrals, legendary gods of destruction spoken of in feared whispers, have returned. The world’s mightiest armies are helpless to stop the fear and chaos spreading across the land. It’s up to the fiery monster hunter Maxim and his eclectic band of adventurers to put a stop to the Sinistrals. Their adventures will take them across an expansive world packed with deadly monsters, valuable treasure, and diabolical puzzles!

This action RPG features six playable characters to choose from, each with their own special abilities and attacks. Players will need to master them all if they want to stand a chance against the game’s fierce enemies and towering bosses that fill both screens!

For more information on Lufia: Curse of the Sinistrals, please visit www.natsume.com. You can also follow all of the latest Natsume news atwww.natsume.com/facebook andwww.twitter.com/natsume_inc.