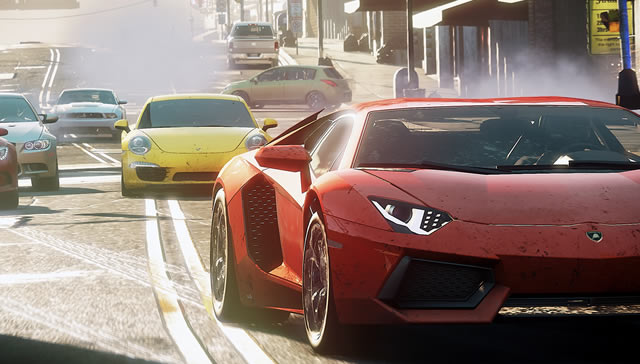 Need for Speed: Most Wanted dated for NA and Europe

REDWOOD CITY, Calif. — Jan. 17, 2013 – Team up to top the Most Wanted List! EA and Criterion Games announced today that Need for SpeedTM Most Wanted, winner of more than 30 industry awards, is coming to Nintendo’s Wii UTM system on March 19 in North America and March 21 in Europe. Need for Speed Most Wanted unleashes gamers into a connected, open world where they race, chase and explore their way to become Most Wanted amongst their friends.

Utilising three unique features of the Wii UTM GamePad controller and including bonus content, the Wii U game makes the race to become Most Wanted more fun and social than ever before. Firstly, introducing an all new local co-op mode, Co-Driver, one player drives using the Wii RemoteTM controller or Wii U Pro Controller, and another player uses the Wii U GamePad to provide control and navigation assistance on a fully interactive real-time map. Using just their fingertips, a partner can distract pursuing cops, switch from night to day or activate enhanced performance for any car and even control the amount of traffic on the road. This is the ultimate advantage for gamers who like to stir up trouble for the cops, their friends or just for fun.

For another competitive edge, players can change their mods, switch into their favorite cars, track milestones and uncover the city’s hidden gems, all on the fly with the Wii U touch screen, ensuring nothing ever slows them down.

Finally, Need for Speed Most Wanted on Wii U brings the blockbuster action of the open world racer to players’ fingertips. The entire game is playable off-screen using the Wii U GamePad, so gamers never have to put the game down.

Need for Speed Most Wanted lets gamers compete against the people they want to defeat most – their friends . With EA’s innovative online technology Autolog 2, the game automatically tracks and compares best race times, high scores and more. These stats are broadcast throughout the open world, fueling friendly competition and rivalries. Curious if you’re still dominating the leaderboards? Autolog 2 alerts you every time you’ve been knocked off the top, reminding you it’s time to reclaim your position. Need for Speed Most Wanted’s online multiplayer also ups the ante for social competition. Gamers pick a car, meet up with their friends and are immersed in a non-stop playlist of action-packed events. Whether it’s competing for the best starting position, the ultimate jump, or finishing first place, if there’s something to do, there’s someone to beat. Any Speed Points earned on Wii U will add to your existing total if you are playing the game on any of the other available platforms.