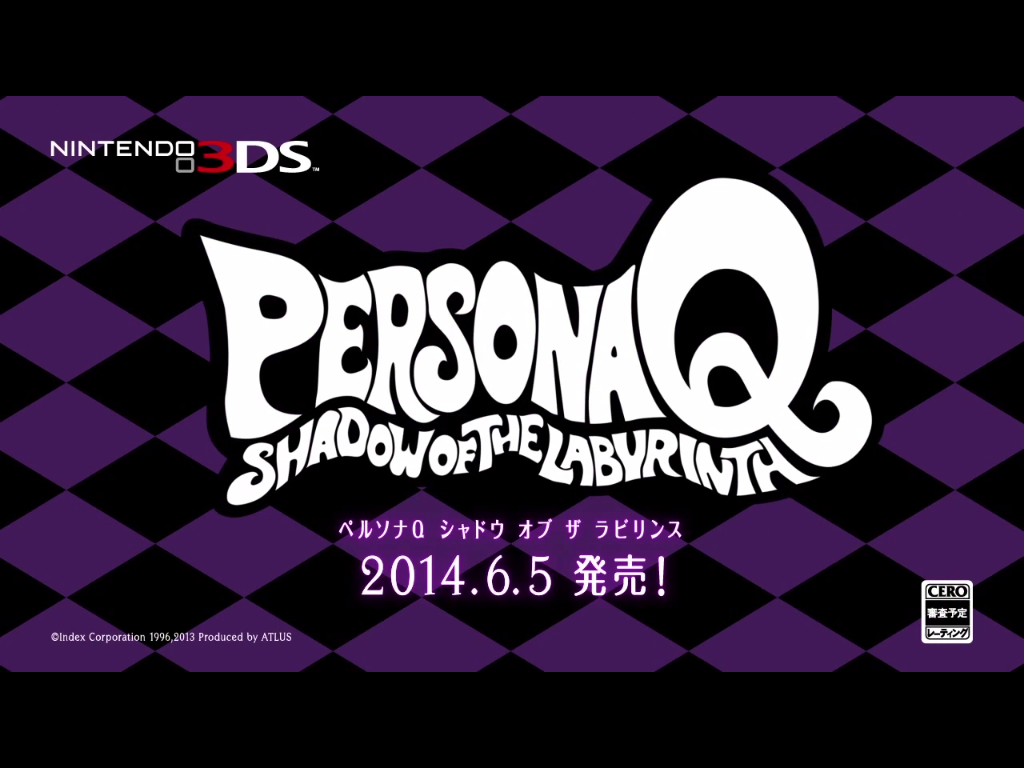 Persona Q: Shadow of the Labyrinth is due to release in Japan on June 5th, 2014.

In the rural town area of Yasoinaba, it is the final day of the culture festival at Yasogami High School. But when the toll of a bell suddenly rings, those with the ability to use a Persona are summoned to another world. In this realm—the spitting image of Yasogami High School—an ominous clock tower appears. Inside the school, the cast meets Zen and Rei, a boy and girl whose memories have been snatched away. When the bell tolls, the curtain opens on a new battle for the Persona cast.

Before starting Persona Q, you must choose to play as the hero of Persona 3 or Persona 4. Depending on which you choose, you will experience a different story.

A second year student at Gekkoukan High School who joins the Specialized Extracurricular Execution Squad in wake of the Shadow attacks. Together with his friends, he works to exterminate the shadows.

His story: A stormy fall night. Regretting the cancellation of the cultural festival, the Specialized Extracurricular Execution Squad, assembled in Tartarus, hear the strange tolling of a bell. At the same time, they become wrapped up in an unusual event with the Velvet Room. The next thing they know, they’re facing the unknown Yasogami High School, bustling with people from the cultural festival. In front of the squad, a Shadow resembling that of Tartarus blocks their way. As they battle against the Shadow, they try to find a way out of the school. But while there, they come across a high school group who call themselves the “Investigation Team…”

Because of his parents’ work situation, he moves to the rural town of Yasoinaba and attends Yasogami High School as a second year student. Together with the Investigation Team, he investigates a series of murders happening throughout town.

His story: It’s the last day of the Yasogami High School culture festival and the members of the Investigation Team are enjoying themselves. But suddenly, the unfamiliar toll of a bell is heard. Outside the window, an unnatural clock tower can be seen. At the same time, the team confirms the appearance of Shadows within the school. And in front of the team appears a group of students from an unknown high school, but who also use Personas. Together with the members of this group, who call themselves the “Specialized Extracurricular Execution Squad,” the team searches for a way out and for an answer to the mystery.

Akihiko Sanada (Persona 3, voiced by Hikaru Midorikawa) – A third-year student at Gekkoukan High School and head of the boxing club. His favorite things are training and protein.

Mitsuru Kirijo (Persona 3, voiced by Rie Tanaka) – A third-year student at Gekkoukan High School and the student council president. She is the only daughter of the Kirijo Group company boss Takeharu Kirijo.

Shinjiro Aragaki (Persona 3, voiced by Kazuya Nakai) – A third-year student at Gekkoukan High School. He seems to be absent from school temporarily.

Yosuke Hanamura (Persona 4, voiced by Showtaro Morikubo) – A student at Yasogami High School. He has a cheerful personality and is the mood maker of the Investigation Team.

Chie Satonaka (Persona 4, voiced by Yui Horie) – A student at Yasogami High School. She has a taste for meat and kung-fu.

Rei (voiced by Kaori Nazuka) – A first-year student at Yasogami High School. Someone seems to have stolen her memories. She is constantly eating corn dogs and donuts, which she appears to take out from nowhere. She has a mysterious atmosphere about her.

Zen (voiced by Yuuki Kaji) – A first-year student at Yasogami High School. Someone seems to have stolen his memories. It appears that he’s always been with Rei, and takes excessive care of her. He protects her with his utmost effort, at times rampaging blindly in order to do so.