The latest Nintendo Direct aired yesterday and was aimed squarely at this month’s biggest release from the Big N, namely Splatoon 2.

The game, which hits the Switch on July 21, is the sequel to the hugely popular Wii U game, which took a unique Nintendo spin on the shooter genre.

The sequel looks to up the ante too, with new features including better customization, new modes like Salmon run, and new splat-worthy weapons to try.

Even more exciting is another chance to try out the game before it launches, with the Splatoon 2: Splatfest World Premiere demo happening on July 15 from 3 to 7 p.m. PT. The demo can be downloaded right now ahead of time.

If you missed the action yesterday, here’s where you can view the Splatoon 2 Direct. You can also read the full details in Nintendo’s press release below.

With the game only weeks away, are you excited about the latest Nintendo Direct? Let us know your thoughts on Splatoon 2 in the comments section below.

REDMOND, Wash.–(BUSINESS WIRE)– With the Splatoon 2 game launching exclusively for the Nintendo Switch console in just a couple of weeks, Nintendo partnered with the renowned Squid Research Lab to provide a refresher on some of the new and returning features coming to the squid sequel. The special Nintendo Direct presentation highlighted many of the game’s new features, new weapons, new locations and, most importantly for all the fashion-forward cephalopods out there, its fresh new styles. The video also touched on SplatNet 2, the new service for mobile devices that displays information about Splatoon 2 like stage schedules, gear and stats. SplatNet 2 is part of the Nintendo Switch Online mobile app launching on July 21, which lets players send multiplayer invites to their friends via social media, as well as enables the use of voice chat in battles. 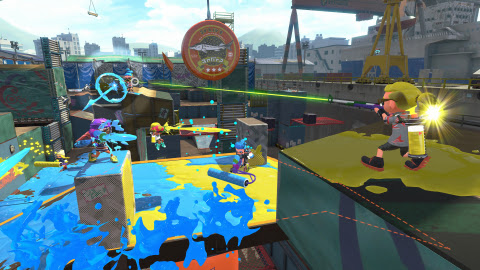 Turf War, which finds two teams of four battling to ink the most turf, makes its grand return in Splatoon 2. There are all kinds of different stages in the game, ranging from city streets, a sports club, an academy and even a BMX track. (Photo: Business Wire)

“Splatoon 2 is a huge, robust sequel to the original Splatoon,” said Doug Bowser, Nintendo of America’s Senior Vice President of Sales and Marketing. “Fans that played and loved the first game will have plenty of new stuff to enjoy, while the game is also a great introduction for players new to the colorful and stylish series.”

To view the Nintendo Direct video in its entirety, visit http://www.nintendo.com/nintendo-direct. Some of the highlights revealed in the video include:

Splatoon 2 launches exclusively for Nintendo Switch on July 21. For more information about the game, visit http://splatoon.nintendo.com/.