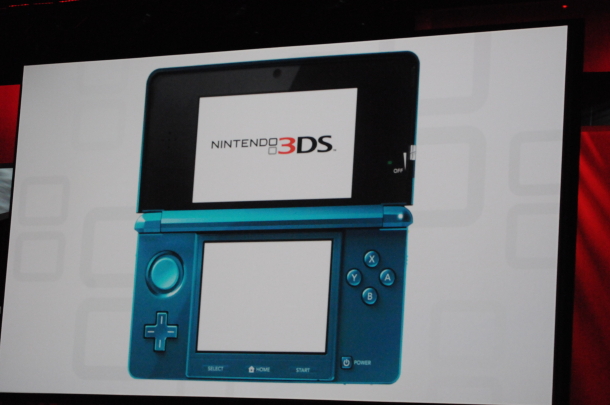 We have  finished with the Nintendo press conference and our demo’s with the 3DS. While waiting for the E3 2010 doors to open we have decided to post a few quick impressions of Nintendo’s new hand held 3DS. Check the impressions from all or us below.

The 3DS technology was better than I hoped for.   The short preview we had, allowed us to control the camera around 3d images of Nintendo biggest franchises.  It was amazing how you could instantly adjust the 3d effect.  The 3d was really impressive and I could really see the depth in the screen.  There was no lag time switching between 3d and none 3d.  The slide pad  which is like and analog stick work perfectly like you would image. The short preview was very impressive and proved Nintendo is the king of handhelds.

The 3DS is everything I’ve ever dreamed of…and more.  The graphics are incredible and the 3D looks amazing!  The ability to be online everywhere, even without Wi-Fi, is a feature I’ve been waiting for on a Nintendo handheld.  This is something I’m really excited about.  I can’t wait to check out the 3D movies that will be coming out for the 3DS.  And the 1st and 3rd party games coming out on it are fantastic!  I didn’t get much sleep last night, so with all this exciting news, I keep having to check and make sure I didn’t fall asleep and it’s all a dream.  But trust me, it’s all true!.

I am a skeptical person, always have been. I’m still not fully convinced that we landed on the moon or man can breath under water….wait Aqua Man  can! I was very skeptical about how the 3D work with Nintendo’s new handheld, 3DS. We I first laid my eyes on the screen…I was fully impressed. Not only did the 3D work really well but the graphics were Wii-like. The transition between 3D-2.5D-2D was seamless.

You can rest easy Nintendo fans, the 3DS lives up to the expectations and more.  So far I’ve just been able to see the 60-second video preview of the 3D effects on the 3DS, but it was a good glimpse at the device’s capabilities.  The 3D was eye-popping and when you used the new analog ‘Slide Pad’, you could even see more depth by changing the viewing angle of the video.  One clip showed a scene from Twilight Princess with some cool particle effects in the foreground.  All of it was beautifully rendered and you could see the difference in depth of each rendered object.  So far I am very impressed and the current lineup of games excites almost more than any other Nintendo system launch.  We’ll post more impressions later after our hands-on session with Nintendo.