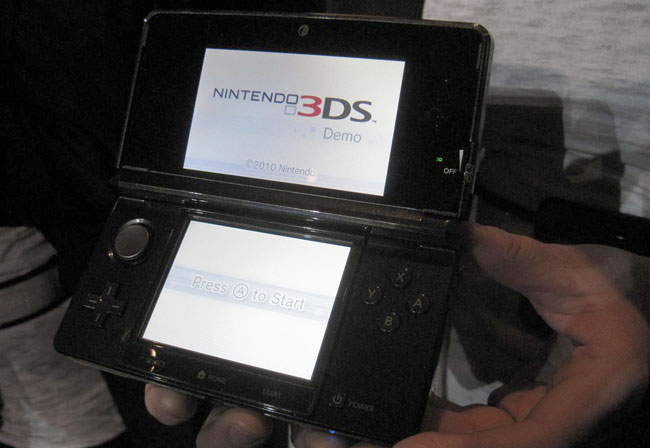 The Nintendo 3DS is to make its UK show debut at this month’s Midlands MCM Expo, which takes place at Telford’s International Centre on 19 February. Visitors to the event will have an amazing opportunity to preview Nintendo’s revolutionary glasses-free 3D gaming system more than a month before its official 25 March launch.

“Nintendo 3DS is not just about being able to watch and play in 3D without glasses – it also offers unique social experiences,” said Laurent Fischer, Nintendo of Europe’s Managing Director of Marketing & PR. “In the way Wii brought families together, Nintendo 3DS will appeal to a broad range of people.”

The Nintendo 3DS includes two screens; the bottom touch screen makes use of a telescoping stylus that is stored in the unit itself while the top screen displays 3D visuals to the naked eye. Looking at the screen is like peering through a window into a world where characters and objects have true depth. The system also has a 3D Depth Slider that lets players select the level of 3D they enjoy the most. The 3D effect can be increased up to the highest level, scaled back to a more moderate setting or even turned off completely, depending on the preference of the user.

In addition to the familiar + Control Pad and button controls found on previous Nintendo handhelds, the Nintendo 3DS now also includes a Circle Pad, which provides a full 360 degrees of direction, giving it the freedom and precision needed to play games in 3D worlds. It brings the same degree of responsiveness that gamers enjoyed when Nintendo introduced an analog control stick to navigate Mario ™ through Super Mario 64 ™ on the Nintendo 64 ™ system.

Meanwhile, a built-in motion sensor and gyro sensor can react to the motion and tilt of the system, so whether players are twisting their systems side to side or moving them up and down, their motion-compatible Nintendo 3DS games respond instantly. According to Nintendo, no other system includes so many tools for game developers to create new and fun experiences for players.