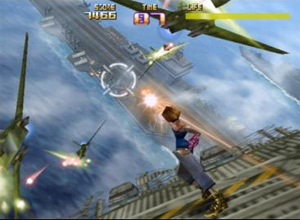 A winner has been declared in Nintendo of America’s nationwide Sin & Punishment™: Star Successor high-scoring challenge. As verified by Twin Galaxies International, the official worldwide authority for all video game high scores and world records, Andrew F. of Milwaukee clinched the title by earning a score of 68,126,154 points in the game’s third level, playing in difficult mode, using the Wii Remote™ and Nunchuk™ controllers.

In recognition of Andrew’s outstanding performance, Nintendo has awarded him a prize package that includes a customized plaque and a selection of Nintendo products. Additionally, Andrew’s score will be submitted for consideration in the Guinness World Records 2011 Gamer’s Edition.

Sin & Punishment: Star Successor is a thrilling arcade-style shooter available exclusively for the Wii™ system. The game’s online leaderboard lets players with broadband Internet access see how they stack up against the competition by viewing top scores from around the globe. Players also have the option of controlling their characters using the Wii Remote and Nunchuk, the Classic Controller™, the Classic Controller Pro™, the Nintendo GameCube™ controller or the Wii Zapper™ accessory.