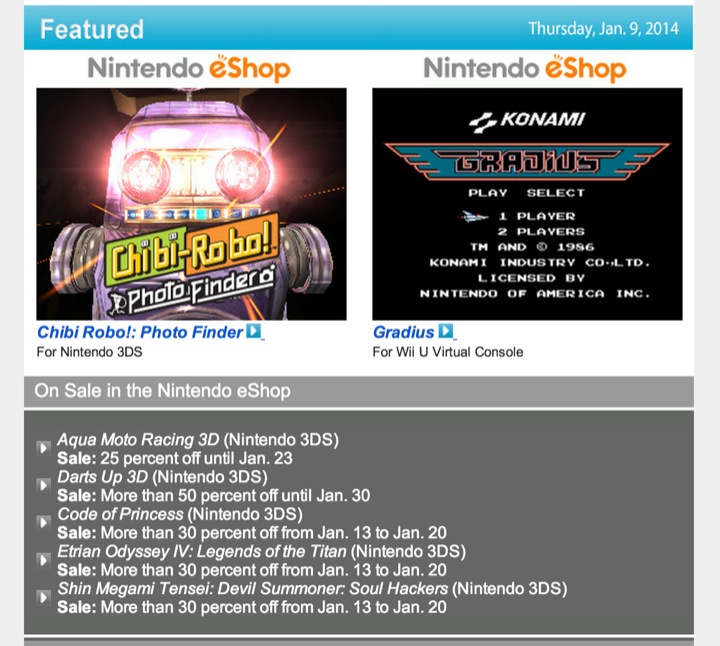 Not a huge list of new games this week but a couple of noteworthy ones.  The latest Chibi-Robo game is now available for download on the 3DS eShop as of today.  There is also a demo version of the game for those that want to try it out first.  Also, Gradius is available for the Wii U Virtual Console.  There are a number of sales that are happening on the 3DS eShop so be sure to check those out.

Anyone else picking up Chibi-Robo today?

Nintendo eShop on Nintendo 3DS
Chibi-Robo!: Photo Finder – Become one of the world’s best tiny robot helpers by taking pictures of real-world objects using the Nintendo 3DS Camera to help open a new museum. Collect Happy Points by vacuuming, picking up trash and helping a cast of colorful characters. Collected Happy Points can be used to purchase in-game film that lets you photograph real-world objects and transport them into the game for the museum’s displays. The full game and free demo version ofChibi-Robo!: Photo Finder are both available exclusively in the Nintendo eShop.

Virtual Console on Wii U
Gradius – In the classic game Gradius, pilot the Vic Viper through seven stages, while shooting, dodging and collecting various power-ups, including missiles, lasers and shields. The only way to end the war is to plunge deep through the enemy forces and destroy them from within.

• Etrian Odyssey IV: Legends of the Titan (Nintendo eShop on Nintendo 3DS)
Sale: More than 30 percent off from Jan. 13 to Jan. 20