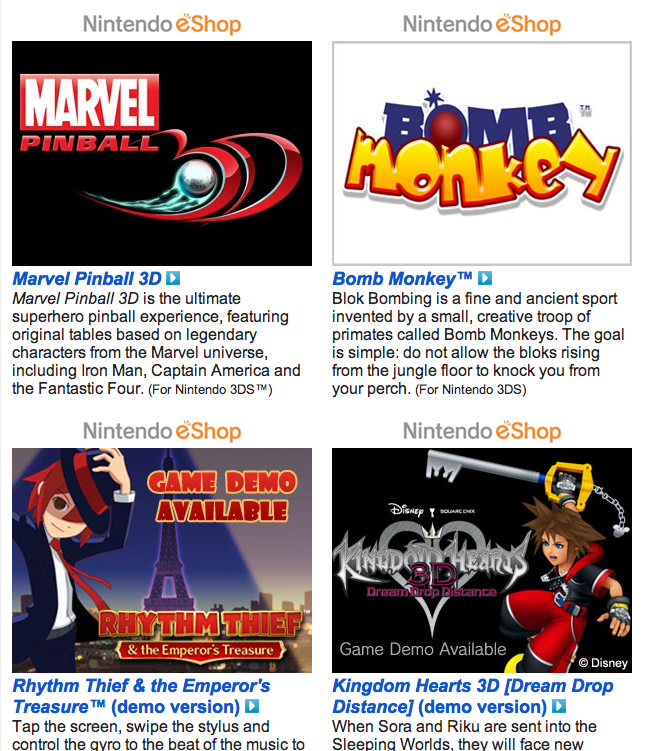 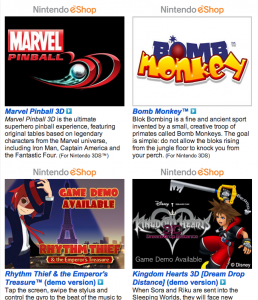 Bomb Monkey™ – Blok Bombing is a fine and ancient sport invented by a small, creative troop of primates called Bomb Monkeys. The goal is simple: do not allow the bloks rising from the jungle floor to knock you from your perch. (For Nintendo 3DS)

Rhythm Thief & the Emperor’s Treasure™ (demo version) – Tap the screen, swipe the stylus and control the gyro to the beat of the music to maneuver Raphael in a variety of rhythm-based challenges. Download the free game demo now in the Nintendo eShop. (For Nintendo 3DS)

Kingdom Hearts 3D [Dream Drop Distance] (demo version) – When Sora and Riku are sent into the Sleeping Worlds, they will face new enemies and make new friends in worlds they’ve never entered before. Download the free game demo now in the Nintendo eShop. (For Nintendo 3DS)

Game of the Weekend
The “Game of the Weekend” program has kicked off in the Nintendo eShop, making select digital Nintendo 3DS games available at a discount. This weekend’s featured title VVVVVV – a game inspired by the classic 8-bit era and the direction of gravity – is available at a special price of $4.99. Offer is valid from 9 a.m. Pacific time on Friday, June 29, through 9 p.m. Pacific time on Sunday, July 1.

To view this week’s Nintendo Download in its full graphical version, please visit:http://www.news2know.net/nintendo/downloadLy65ed8W.php.