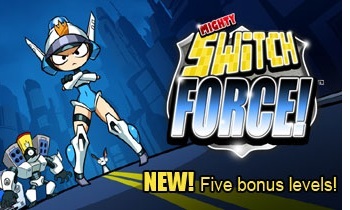 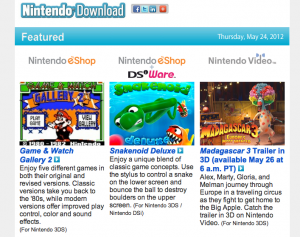 Nintendo eShop + Nintendo DSiWare
Snakenoid Deluxe – Enjoy a unique blend of classic game concepts. Use the stylus to control a snake on the lower screen and bounce the ball to destroy boulders on the upper screen. (For Nintendo 3DS / Nintendo DSi)

Nintendo Video
Madagascar 3 Trailer in 3D (available May 26 at 6 a.m. PT) – Alex, Marty, Gloria, and Melman journey through Europe in a traveling circus as they fight to get home to the Big Apple. Catch the trailer in 3D on Nintendo Video. (For Nintendo 3DS)

To view this week’s Nintendo Download in its full graphical version, please visit:http://www.news2know.net/nintendo/download3F1z8b1t.php.