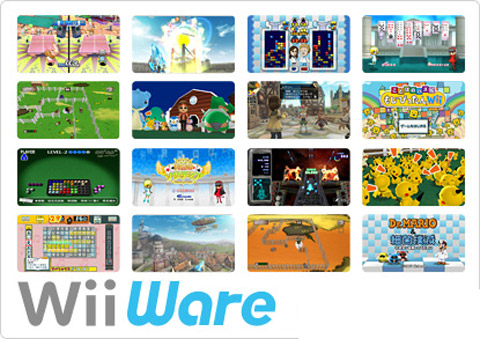 NINTENDO DOWNLOAD: PUT THAT SUGAR OVERLOAD TO GOOD USE WITH NEW GAMES FROM NINTENDO

Halloween has passed, but there’s no reason you can’t spend time pretending to be someone – or something – else. For the WiiWare™ downloadable game service, players can hop inside a robot in Robox®. For Nintendo DSiWare™, players can take on the role of the Ultimate Pacifier in Paul’s Shooting Adventure or go solo with Peg Solitaire. For a sporty look, try out a classic three-on-three basketball game for the Virtual Console™ service. Get the best of both worlds with a virus-controlling game, Gene Labs available for both WiiWare and Nintendo DSiWare.

Robox
Publisher: DreamBox Games
Players: 1
ESRB Rating: E (Everyone) – Fantasy Violence
Price: 1,000 Wii Points™
Description: An exploratory probe has been sent to a strange planet to investigate the loss of several previous probes and to collect information. Following a crash landing on the planet’s surface, our main character loses the skills that were to enable the accomplishment of the mission. Help him recover them with the help of the strange creatures that have taken over his mechanical interior… and discover the truth behind his new mission. You can enjoy a complete adventure mode that takes place in different locations around the planet, exploring different paths and discovering the many secrets hidden in the planet. Inside the exploratory probe, you can control tiny creatures that will help you to repair the areas damaged by the crash landing, thus recovering skills and accessing memory files. If you cannot move through the interior of the robot you must find amber rocks on the outside in order to obtain to new creatures and progress through the internal circuits.

Gene Labs
Publisher: FRONTLINE Studios
Players: 1-2
ESRB Rating: E (Everyone) – Mild Fantasy Violence
Price: 500 Wii Points
Description: Gene Labs is an arcade puzzle game set in the world of genetic science and experiments. New viruses that are capable of genetically changing any living organism are spreading all around the world. The only hope is to cure the infected cells by looking at them under a microscope and injecting the anti-virus solution at your disposal. The goal of the game is to distribute the anti-virus solution to the cells visible under the microscope before they become infected by deadly virus. Drag the solution from healthy cells to infected cells to kill them and/or prevent the healthy cells from becoming infected by the bad virus.

Paul’s Shooting Adventure
Publisher: Agetec, Inc.
Players: 1
ESRB Rating: E (Everyone) – Mild Cartoon Violence
Price: 200 Nintendo DSi Points
Description: Super Baby Paul, the Ultimate Pacifier, stars in this classic side-scrolling shooter. The player controls Paul, the son of a super hero family who was born with innate super powers. Paul has the ability to take flight and attack with powerful projectile energy. But, most importantly, and unique to Paul is that he’s gifted with the ability to take the form and harness the weaponry from fallen enemies. Paul is summoned to take on an alien invasion force bent on conquering Earth’s oceans. It’s up to Paul to use both his own powers and the weapons obtained from the aliens to fight back and protect Earth’s most vital resource. His action-packed adventure goes from the seas to the stars themselves. Let’s hope Paul can save our oceans before nap time.

Peg Solitaire
Publisher: CIRCLE Entertainment
Players: 1-2
ESRB Rating: E (Everyone)
Price: 500 Nintendo DSi Points
Description: A classic thinking game, Peg Solitaire is a board game for solo players where you have to move pegs strategically on a cross-shaped board with 33 holes. Some boards use marbles that sit in shallow indentations. In the United Kingdom, this game is known asSolitaire, and the card games are called Patience. The game has five levels with 41 stages to allow players to learn the game-play techniques step by step.

STREET SLAM
Original platform: NEOGEO
Publisher: D4 Enterprise
Players: 1-2
ESRB Rating: E (Everyone)
Price: 900 Wii Points
Description: This 3-on-3 street basketball game was released in 1994. Players choose from 10 teams vying for the position of the strongest street basketball team in America. The excitement of this game comes from the players’ ability to enjoy an exhilarating game of street basketball. In addition to pulling off fancy slam dunks, players can enjoy the thrill of basketball with simple controls that allow them to make passes to players in midair to throw down a slam dunk or dunk when rebounding the ball. Additionally, if players charge up their gauges, they’ll be able to make an earth-shattering super shot that can break any defense. This game successfully combines adherence to the basics of basketball with some outrageous special moves.