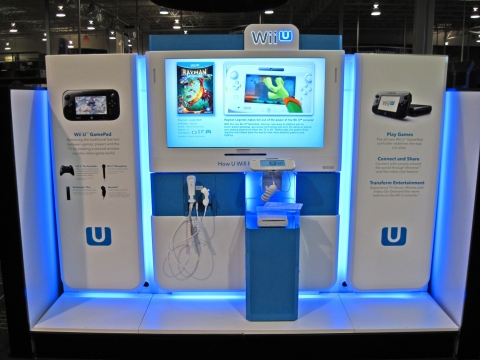 Nintendo Rolls Out 5,000 Wii U Kiosks to Let Shoppers Play Before Launch Day

REDMOND, Wash.–(BUSINESS WIRE)– Holiday shoppers from coast to coast will soon get a firsthand look and hands-on time with Nintendo’s groundbreaking new Wii U console. Starting now, more than 5,000 interactive Wii U kiosks will roll out at select retail stores across the United States, inviting families and consumers to discover the unique gaming and entertainment experiences made possible by Wii U and its touch-screen Wii U GamePad controller.

Participating retailers include Target, Best Buy, GameStop, Walmart and Toys ‘R’ Us. Depending on which type of Wii U sampling station is available at a given store location, visitors may be able to experience hands-on game play or enjoy specially created video content that highlights the console’s wide variety of available games and features. Consumers will be able to get more information about launch games like Nintendo Land, New Super Mario Bros. U and SiNG PARTY, along with ZombiU and Rayman Legends from Ubisoft, among others. To find the nearest Wii U sampling station, visithttp://www.nintendo.com/wiiu/events.

Launching Nov. 18 in North America, Wii U and the integrated Wii U GamePad offer completely new experiences that change the way people play games, watch video programming and connect with family and friends. The Wii U Deluxe Set will be available at a suggested retail price of $349.99, and includes black hardware with 32 GB of memory, a black Wii U GamePad, Nintendo Land, a console stand, a GamePad stand and a GamePad charging cradle. Consumers who purchase the Deluxe Set will also be enrolled in the Deluxe Digital Promotion and earn 10 percent back in Points on all games and content downloaded at the Nintendo eShop for the Wii U. Points can be exchanged to receive Nintendo eShop credit that can be used toward a future Wii U or Nintendo 3DS game purchase. The promotion is currently planned through 2014.

The Wii U Basic Set includes white hardware with 8 GB of memory and a white Wii U GamePad, and will be available at a suggested retail price of $299.99.

For more information about Wii U, visit http://www.nintendo.com/wiiu.