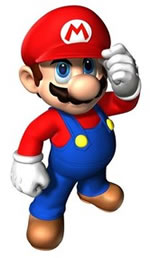 Thirty years ago if you had declared that one of the most admired heroes of the day would be a portly, flamboyant Italian-American plumber in bright red overalls who fought evil turtles in order to save sentient fungus, you most likely would have been declared a witch and burned at the stake. But I’ll be damned if you wouldn’t have been completely right! Arguably the most recognizable face in the video game industry, even to those out of touch fogies who have never gazed with cataract-encrusted eyes at a video game, Mario and his games are some of the most influential forces in video game history. By running around like a spaz, breaking blocks with his head and crushing his foes under the heels of his cruel feet, Mario set the standards for which all 2-D, and eventually even 3-D, platformers would be defined. And his design, a glorious mixture of the mundane and the utterly absurd has withstood the test of time brilliantly. But what makes Mario truly great is that he’s a workingman’s hero. Giant ape? Fire-breathing dragon/turtle? Space alien? Clogged drain? Mario is the kind of guy who sees any challenge and says, “I can handle that.” Not in a cocky way, but with the down-to-earth confidence of a regular Joe confronting a problem that somebody needs to deal with. Mario doesn’t really possess any special powers, but he’s dedicated and hardworking, and gosh darnit, that’s what sees him through! A true inspiration for the children.

Who could be Number one!! Click Here to find out.