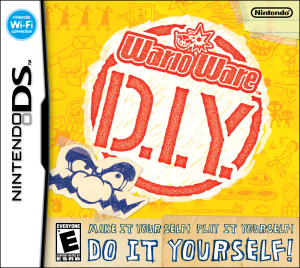 WarioWare: D.I.Y. kick-starts the creative process with more than 90 built-in microgames that players can unlock as they progress through the game. When users are inspired to create their own microgames, they can choose from a library of ready-made graphics, sounds and game elements, or let their imaginations run wild and build a whole new microgame from scratch.

“With WarioWare: D.I.Y., Nintendo is giving players a glimpse into the process of making video games, providing them with the tools to bring their ideas to life and share them with friends,” said Cammie Dunaway, Nintendo of America’s executive vice president of Sales & Marketing. “For anyone who has ever wondered how their favorite video games came to be, this is sure to be a fun and rewarding experience not to be missed.”

WarioWare: D.I.Y. players who own a Wii™ console and have broadband Internet access can extend the action into their living rooms. By downloading the WarioWare: D.I.Y. Showcase game, launching March 29 for Nintendo’s WiiWare™ service, they can access more than 70 additional microgames and experience the hand-held games they created with their Nintendo DS systems on a full-sized TV screen. There’s also an unlockable multiplayer mode that lets up to four players enjoy microgames together (additional controllers required and sold separately).

WarioWare: D.I.Y. for Nintendo DS offers several ways for players to share content on the go. Using a local wireless connection, they can swap microgames they’ve created on their own Nintendo DS system. For users with broadband Internet access, Nintendo will make new microgames available for download after launch and will occasionally challenge players to create microgames based on a given theme. A broadband Internet connection also enables players to upload items to their online Storage Crate and share those items by exchanging friend codes with other WarioWare: D.I.Y. users.

The new Nintendo DSi XL™ system adds to the experience of making your own microgames by making WarioWare: D.I.Y. larger than life. Nintendo DSi XL has screens that are 93 percent bigger than those on the Nintendo DS Lite system, and include the ability to be viewed from a side angle, in case you want to show off your game creations to a friend.

About Nintendo: The worldwide pioneer in the creation of interactive entertainment, Nintendo Co., Ltd., of Kyoto, Japan, manufactures and markets hardware and software for its Wii™, Nintendo DS™ and Nintendo DSi™ systems. Since 1983, when it launched the Nintendo Entertainment System™, Nintendo has sold more than 3.3 billion video games and more than 558 million hardware units globally, including the current-generation Wii, Nintendo DS and Nintendo DSi, as well as the Game Boy™, Game Boy Advance, Super NES™, Nintendo 64™ and Nintendo GameCube™ systems. It has also created industry icons that have become well-known, household names such as Mario™, Donkey Kong™, Metroid™, Zelda™ and Pokémon™. A wholly owned subsidiary, Nintendo of America Inc., based in Redmond, Wash., serves as headquarters for Nintendo’s operations in the Western Hemisphere. For more information about Nintendo, visit the company’s Web site at www.nintendo.com.