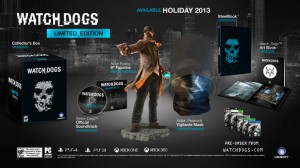 The Aiden mask and statue look amazing, and the mask is a pretty creative special edition item.

The bad news is that the special edition is available on every console Watch Dogs is being released on BUT Wii U, so if you want to get the Special Edition of Watch Dogs and your only console is the Wii U, you are out of luck. I wonder why Ubisoft made this decision, but it bet it is related to the Wii U’s flagging sales.

Watch Dogs will hit shelves on November 19 for North America.