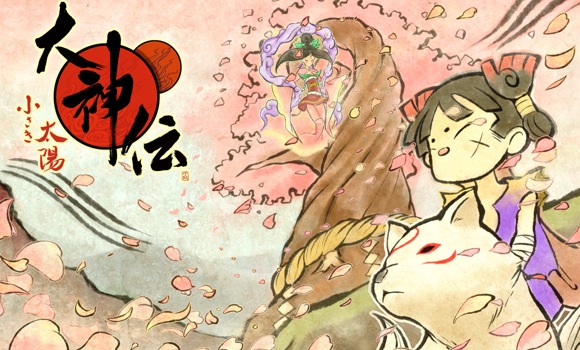 Issun
He is a small fairy that has crossed the country as a traveling painter. Through an unexpected meeting with Amaterasu, he became his partner and helped save Nippon from the threat of Orochi. The two went their separate ways and Issun continues to travel the country as a Celestial Envoy so that he can spread the word of the gods. He was the first to notice the forthcoming catastrophe and is now set on discovering the truth behind it with Chibiterasu.

Susano
Descendant of the legendary hero Nagi, Susano is the true hero who defeated Orichi during the events 9 months earlier. Soon afterwards, he marries Kushi and the two were blessed with a son, Kuni. A doting father, he cannot help but worry about Kuni.

Kushi
Though almost sacrificed to Orochi’s in the catastrophe nine months earlier, she is rescued thanks to the efforts of Ameterasu and Susano. Kushi agrees to marry Susano and the two were blessed with a son, Kuni. Though she can get a bit fed up with Susano’s doting, the three live happily together.

Sakuya
The spirit of the sacred tree, Konohana, and watches over Kamiki Village. She gives advice to Chibiterasu in an effort to save Nippon from the evil that has attacked the land once more.