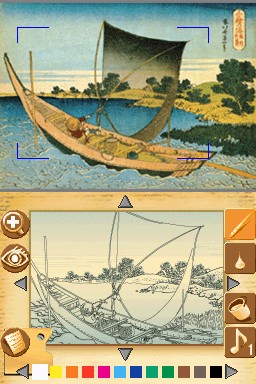 Mercury Games today (02/07/07) announces the first game to be released as part of its Zen Series will be “Paint by DS”. The game, along with the rest of the Zen Series, will be aimed at people who may not traditionally use video games.

Paint by DS is a digital colouring book which enables the player to recreate masterpieces by renowned artists such as Hokusai, Cezanne and Van Gogh, in their own artistic style. The player uses the DS stylus to mix oil and water-based paints to create colours and consistencies and then paint the artwork.

Paint By DS consists of 15 colouring in challenges along with a variety of fun mini games, such as puzzles based on the famous artwork included in the game.

In line with the Zen games proposition of relaxing, non-violent and non-competitive games, Tomo Ohno, Chief Operating Officer of Ertain BV said: “This is the first of the Zen Series games and shows perfectly how the Nintendo DS can attract a different type of user. Paint by DS helps the player relax, and be artistic anywhere, anytime.”
The game, which includes patented technology, will be released on 24th August 2007, across Europe, priced at £19.99/€24.99. The US release date will follow in Q4 2007.