[Update] A couple of scans from Famitsu have just emerged.  According to Siliconera, who translated the scans, Phoenix Wright is visiting a foreign country (though Famitsu is not detailing why), and that its citizens believe in spirits of the dead.  We also know the court system in this country uses something called a water mirror. 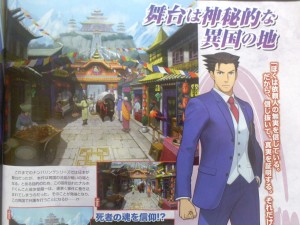 Aside from Phoenix, Famitsu’s pages display another character, Bokuto Tsuani, “a cheerful priest in training who works as a tour guide for a living.”  Could this priest become Nick’s new assistant for Phoenix Wright 6? 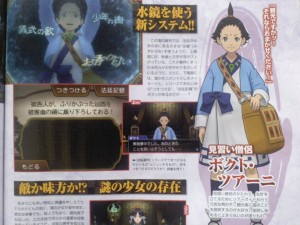 [Original] The sixth entry in the Phoenix Wright series was recently announced in Japanese Gaming Magazine, Famitsu.  Currently, there is not much more information, but we do know that the game will be playable during this year’s Tokyo Game Show.  The game will also have a western release, though the date is unknown.

According to Brian Ashcraft of Kotaku, the latest entry in the Phoneix Wright series will have, “a new game system that enables quicker gameplay.”  Unfortunately, there is no more information to expand upon.  We expect to hear more information as we get closer TGS, which runs from September 17 to September 20 this year.