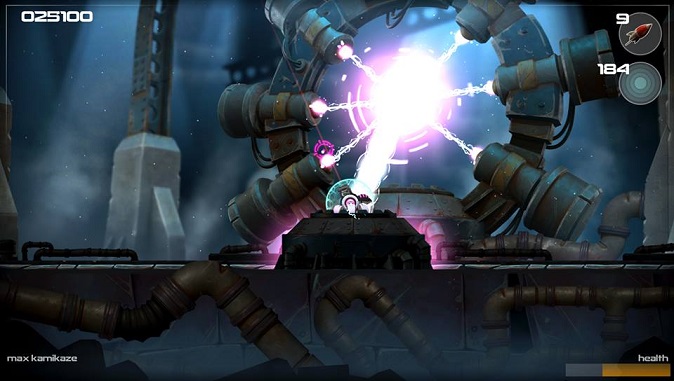 Pure Nintendo fans may recall that RIVE (‘the metal wrecking, robot hacking shooter’) from Two Tribes graced the cover of issue #19 of PNM.  At PAX East I was able to sit down and get a few minutes of playtime with the game.  Two Tribes are back! 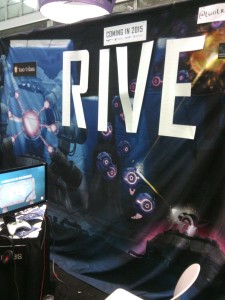 There were plenty of noteworthy and commendable aspects I picked up on during gameplay.  For one, the twin stick shooting action was smooth and responsive.  Even playing on an Xbox controller, I was able to jump into the action immediately.  And that’s good, since things started fast and never let up.

Variety was quite evident during play.  There were plenty of enemies to tackle (with lots of impressive explosions!), and obstacles to avoid.  A nice blend of dark and (refreshingly) colorful environments were shown.  Navigating through them wasn’t straight forward either, as there was a mix of both left to right and right to left movement.  Vertical flying was also required.  Much of this will be introduced more gradually in the finished game, but it certainly heightened the excitement of the demo.

The hacking mechanic is a unique feature of RIVE, one that I only got to tinker with a bit.  It was hard to analyze it too much amidst all the fast action, but I like the promise it shows. Incorporating it in with the shooting provided a nice contrast, and will surely add some depth to the proceedings. 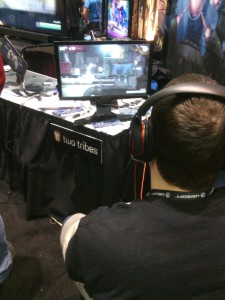 You can expect lots of powerups in this title.  One thing you cannot expect (at least not at launch) is two player support.  While this is disappointing, multiplayer has not been ruled out for a later update.  Unique features for the GamePad still haven’t been finalized, but they are certainly something that the devs continue to invest in.

RIVE is very different from Two Tribe’s past work.  Its fast action and amount of onscreen activity is a lot to take in, especially for those unaccustomed to games of this style.  It made me smile however, taking me back to my boyhood days with the TG-16 and Genesis!  On a system with plenty of impressive platformers, puzzlers, party games, etc. Two Tribes is finishing a title the likes of which the Wii U really doesn’t have.  That excites me, as it should all gamers.