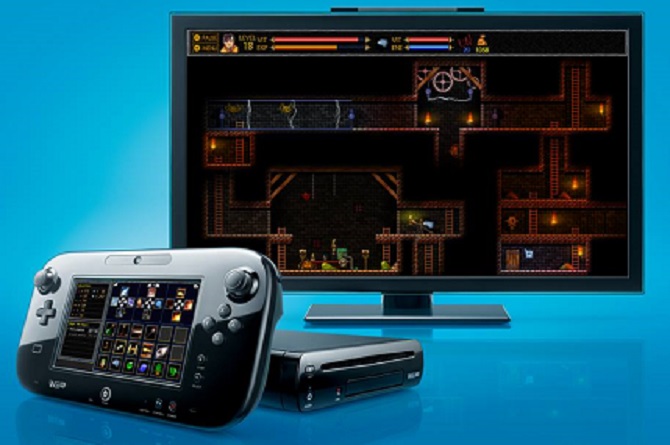 Similar to what James and Justin did for Pure Nintendo’s Assassin’s Creed IV review, ‘J Money’ and I have given the double review treatment to Unepic.  While we have some slight differences of opinion on a few things, we both agree that this new eShop game is fantastic!

Unepic is about a guy named Daniel who was unknowingly thrown into the quest of a lifetime after taking a bathroom break from a roleplaying game session with his friends.  Being a roleplaying game itself, it seems like a fitting way to kick of Unepic.  Daniel’s adventure through Harnakon’s Castle is filled with different characters, items, weapons, and more but what I found most unique about this roleplaying game is the humor sprinkled throughout the dialogue. 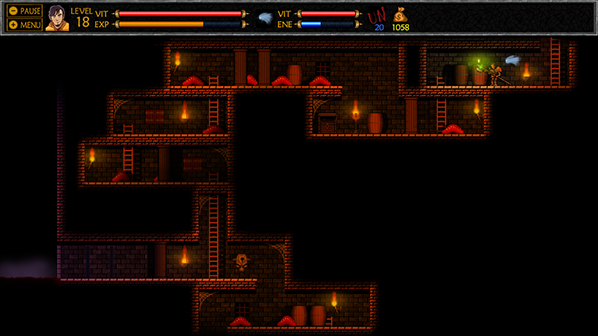 Much of the humor in Unepic takes place during the conversations between Daniel and the shadowy being that possessed, which he calls Zera.  The occasional humor is a refreshing addition to a RPG game, a genre that is typically serious in tone, but the challenges players will face in Unepic are no laughing matter.  While most of Unepic is fairly easy to explore while battling through various types of enemies, there are plenty of daunting portions of the game to keep players busy.  Unepic also comes equipped with ‘Challenges’, which act as a sort of achievement system, and they are a great extra for completionists.  Even though Unepic is difficult during some areas of the game, players can select a difficulty level that suits them, which range from easy to hard++, so players who may not want to slog through an arduous RPG experience can opt for an easier gameplay setting. 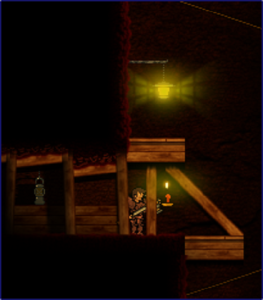 The rooms throughout Harnakon’s Castle are very detailed and the environments look great.  The sound effects and music in Unepic are also very well made but these factors are not where I felt Unepic really shined.  The rooms and environments in Unepic are shrouded in darkness except for light emanating from the flame the player is holding.  It is up to the player to light up each room by lighting torches around the castle.  This leaves players wondering what they’ll run into next.  And like many other RPG games, the character stats are entirely customizable as players level up and stats change based on what is equipped.  The GamePad is used quite well in Unepic and allows for full customization for items and weapons.  A map can be viewed on the GamePad but I never found it very useful.  Unepic can also be played entirely on the Wii U GamePad using the Off-TV feature and what I found unique about this is that the Off-TV feature used a zoomed in view of the player than what is displayed on the TV.   This more focused view could be useful for players having trouble viewing on screen objects which can be very small at times.

Throughout my time with Unepic I found that it plays well overall but I did run across a few moments when the game seemed to be a little slow to load.  These slow loading times seemed to occur most often after dying and on other occasions when selecting ‘action’ when discovering something new.  The only other issues I had while playing Unepic had to do with jumping in the game.  The first issue, which is more of a want, is that the ability to jump from a ladder would have been a nice inclusion.  Players can drop from ladders, which is not a problem because there is no fall damage, but sometimes jumping from the ladder would make reaching some of the ledges a little easier.  The other issue, which may just be my platforming skills, is that some seemingly simple jumps felt more difficult to achieve than they should have and again this could be my own pathetic platforming skills. 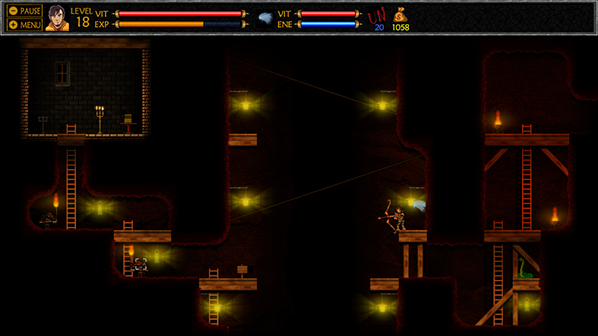 Unepic is a joy to play and there is a ton of room within Harnakon’s Castle to explore.  The humor scattered throughout the game provides some lightheartedness within an otherwise dark gameworld.  Even though I had a few small issues with Unepic, I never found that they were impacting my satisfaction with the game while playing.  With only having played the game in the normal difficulty setting it is hard to tell if Unepic would be easy enough for a younger gamer to play but fans of RPG games will definitely want to give Unepic a whirl.

Unepic’s received quite a bit of coverage from Pure Nintendo over the past few months – we’ve shared new announcements, screenshots, and trailers among other things. Nevertheless, the game still caught me off guard when it finally became available to review – Unepic exceeded all expectations I had! I hope I’m able to convey just what an outstanding game this is with just a few hundred words … 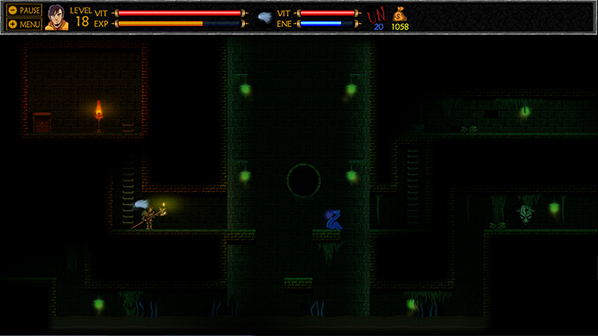 What starts as a simple tabletop RPG with buddies turns into a full-fledged video game adventure as you take control of a modern-day hero riding out a hallucination. You’ll traverse a huge labyrinth style medieval castle along with an unexpected, but hilarious companion. This clever story approach allows for a great deal of tongue-in cheek humor, and lets Unepic get away with things other games can’t. Whether it’s referencing a favorite classic game, paying homage to popular movies, or just mocking gaming clichés in general, Unepic will have you laughing repeatedly. I found myself waiting expectantly for the next batch of funny dialogue, and Unepic consistently delivered, embracing its spoofy nature to the full! It crafts a wonderfully funny tale, with plenty of interesting and memorable characters.

Part hack n slash RPG, part platformer, Unepic’s adventurous gameplay has broad appeal. Besides blurring genre lines, it also offers four difficulty levels so that everyone, regardless of experience, can make some initial progress. The game is challenging though (even on normal) and the lengthy adventure is full of tough enemy encounters, side quests, and secrets.  Unepic will keep you busy for a long time! 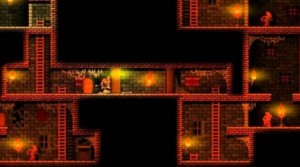 Visually Unepic appears influenced by 16-bit games – in many ways it feels like a lost SNES game. The impressive lighting effects reflect more modern advancements however. I really like how lighting torches gradually fills in the map – it’s one of many things demonstrating smart level design.  The game runs smooth, and zooming is a great effect that draws attention to various details and touches that might otherwise be missed.

The atmospheric soundtrack is another way Unepic draws you in to its fantasy world. It features strong music, but the strengths extend to other audio areas too, most notably voice acting. By and large the voice work is excellent – In particular the two lead characters are top-notch, having a priceless buddy film type chemistry! Clever dialogue makes the professional voice work stand out even more. 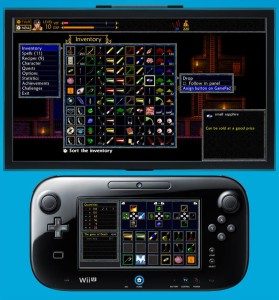 When it comes to control, I can’t imagine playing Unepic without the Wii U GamePad. Being able to assign a multitude of items and having instant access to them makes me wonder how I’ve tolerated subscreen menus for so long. Regardless, it’s clear good control was a priority with Unepic from the start – it is part platformer after all. Jumping over traps, ducking under projectiles, whatever platforming challenges are thrown your way the control’s up to the task. Backtracking’s made easier too, thanks to inclusions like a central hub granting faster access to various parts of the castle while also replenishing health and allowing a quick save. It makes level grinding fun, and not the chore that it is in similar games. Being able to save skill points is another level grinding perk.

With a story that surprised with its sheer amount of humor, control that impressed with how well it used the Wii U GamePad and (most of all) fun gameplay that kept me hooked, Unepic proved itself a triumph on every front!  There is so much more I could talk about. Unepic is one of the best Wii U games I’ve played yet!