This weeks featured artist is Tony Schmeding. His love of the ‘Donkey Kong Country’ series has inspired him to create his own character ideas for various different types of Kongs. Each with their own personalities and characteristics. Below you can find just a handful of Tony’s many ideas. Each with info describing the character. If you have any questions or character suggestions for Tony, leave them in the comments section below, enjoy! 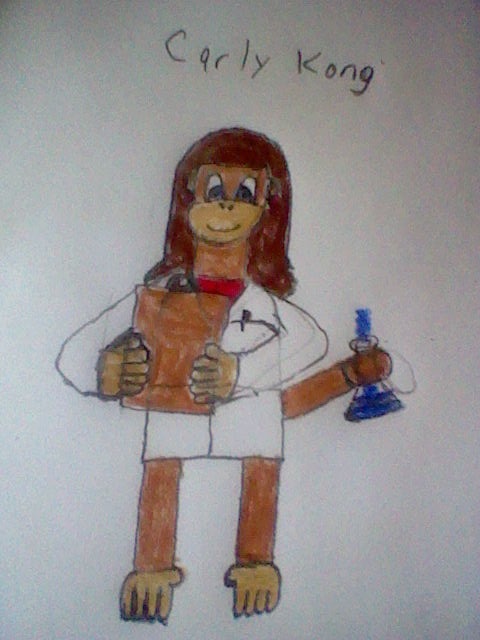 Carly Kong is Mike Kong’s girlfriend and works alongside him and Tony Kong in the Kong laboratory. She usually remains calm through almost any situation. She helps in the development of new technology while also conducting experiments.

KD: Hi Tony, tell our readers a little bit about yourself and your love of Donkey Kong Country.

TS: My name is Tony Schmeding, and I’m an amateur artist. I live in Waterloo IL currently with my father. My DKC interest started in my childhood when my parents managed to buy me Donkey Kong Country 3 after Super Mario Kart for my Super NES as for how old I was, I don’t even know, it was ages ago. One day later my dad showed me a magazine that featured games and the other two of the trilogy were in it. He asked me if I wanted to get them and I said yes! Back then I was excited and probably got them on a whim, but when they arrived it didn’t take long for me to start on them. I had fun with them all back then (sadly I didn’t get to experience DK 64 until more modern times.). I still have them now and all of my SNES games along with the console itself still work. I enjoyed the original Rare trilogy so much that I got the GBA versions as well as the SNES virtual console versions on my Wii U. 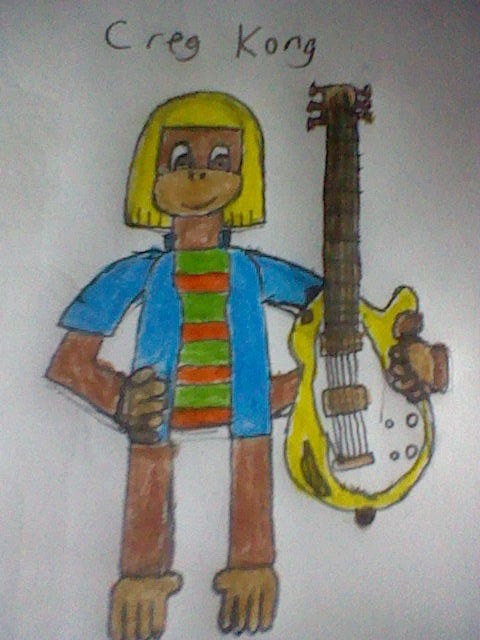 Creg Kong is one of many cool kongs on Morica Island. He’s one of Tony Kong’s best friends after Shawn and George and is Samantha Kong’s boyfriend plus a guitarist. He and Samantha share an interest in Rock’n’Roll music and in several other things. He’s usually seen as calm and collected in most situations. He and Tony Kong met one day when he was seen in front of his house while playing and tuning his old guitar and they’ve been friends ever since. Since he currently has an electric guitar, he’s trying to find a band to join. Until he finds a band, others can enjoy the sound of the music from his guitar solo. One of the phrases he says is the following: “Watch out guys, I’m in the banana zone!”

KD: What inspired you to create your own DKC characters?

TS: I really have no idea what inspired me to make them. I guess it was because of the original Rare trilogy and the character cast themselves, the way they looked made me want to get started on my own. I know for sure that my characters started out within my mind through my original storyline I had which is being recreated now. 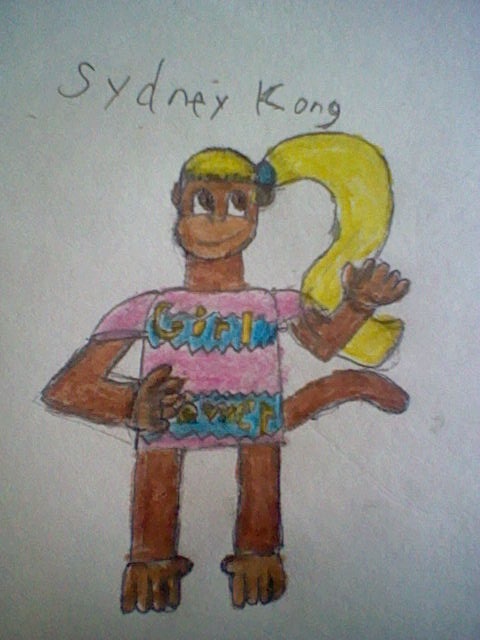 Sydney Kong is best friends with Chloe, Brittany, Tasha and is Tony Kong’s 4th love interest. Sydney is an energetic tomboy who is proud of her long hair. She sometime gets advice from her three main best friends on certain things since they’re her advisers. After spotting Simon Kong with his love Maria, Sydney decided to go after Tony Kong since they were friends even though he already had 3 love interests. Some occasionally mistake her for Dixie Kong since they have the same abilities and look quite alike. Like many others on Morica, Sydney’s 13 years old.

KD: What type of storyline are you planning to incorporate them in?

TS: It’s gonna be a big one with various sagas and some possible side stories as well as some romance and etc. 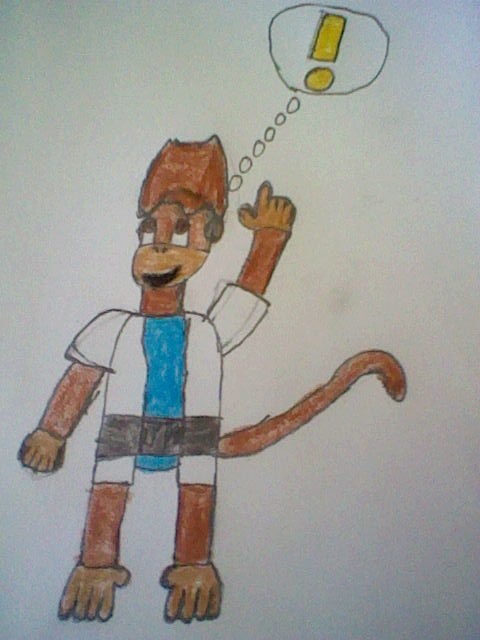 Tony Kong is one of two primary and many crucial characters in the Donkey Kong Country Storyline. He was born like most others on Morica Island(His home Island) and didn’t have powers at birth. He ended up getting powers over time due to others he met in his life. He’s a hero, a scientist and a worthwhile friend. He can almost get a long with anyone except those that are evil. Tony Kong is Laura Kong’s boyfriend but he’s also in love with one of the Swine Kingdom Princesses Olivia as well as having an interest for two of his other good friends Violet Kong and Sydney Kong. Other than his 4 main love interests, Tony had minor crushes on Ally Pig and Princess Peach. He rescued Laura Kong from his dark counterpart along with the help of two mysterious fairies. He along with Mike Kong, Carly Kong and others eventually built a lab on a nearby island to Morica that even though now fully built, is still under development on the inside. He has currently three alternate forms and will gain more over time as his power grows.

KD: How many characters in all have you created and which one is your favorite?

TS: So far there’s at least 109 characters known but there’s more to come as my storyline continues through development. I like all of my characters but the ones I like the most are Tony Kong and Laura Kong as they are the primary characters of the storyline I’m working on. 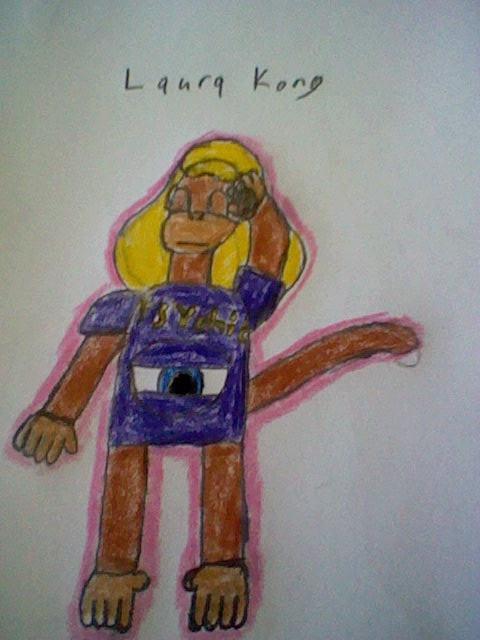 Laura Kong is the other of the two primary yet one of the many crucial characters in the Donkey Kong Country Storyline. She is Tony Kong’s psychic girlfriend and is usually seen by his side when opposing evil threats. Like Tony, she is well known to many on Morica Island. She was kidnapped by Dark Tony when she was younger but ahead of time foresaw the kidnapping and gave her childhood friend clues about the event. She eventually was rescued and returned to living life on Morica Island even though she was gone for some time. Her psychic power has grown strong, strong enough to even control her boyfriend when needed. She’s one of the many most liked Kongs on her home island and she’s a kindhearted one.

KD: Thanks so much Tony! Where can our readers follow you, or checkout more of your ideas if they’re interested?

Any artist interested in having their artwork on PureNintendo.com or in PNM can contact me at Kaelyn@purenintendo.com. We love to see anything Nintendo themed from fan art to sculptures to baked goods. You could be the next Pure Nintendo featured artist! Also to see artwork from artists featured in our magazine, PNM, please head to PureNintendo.com/magazine to subscribe!  Thanks for reading.