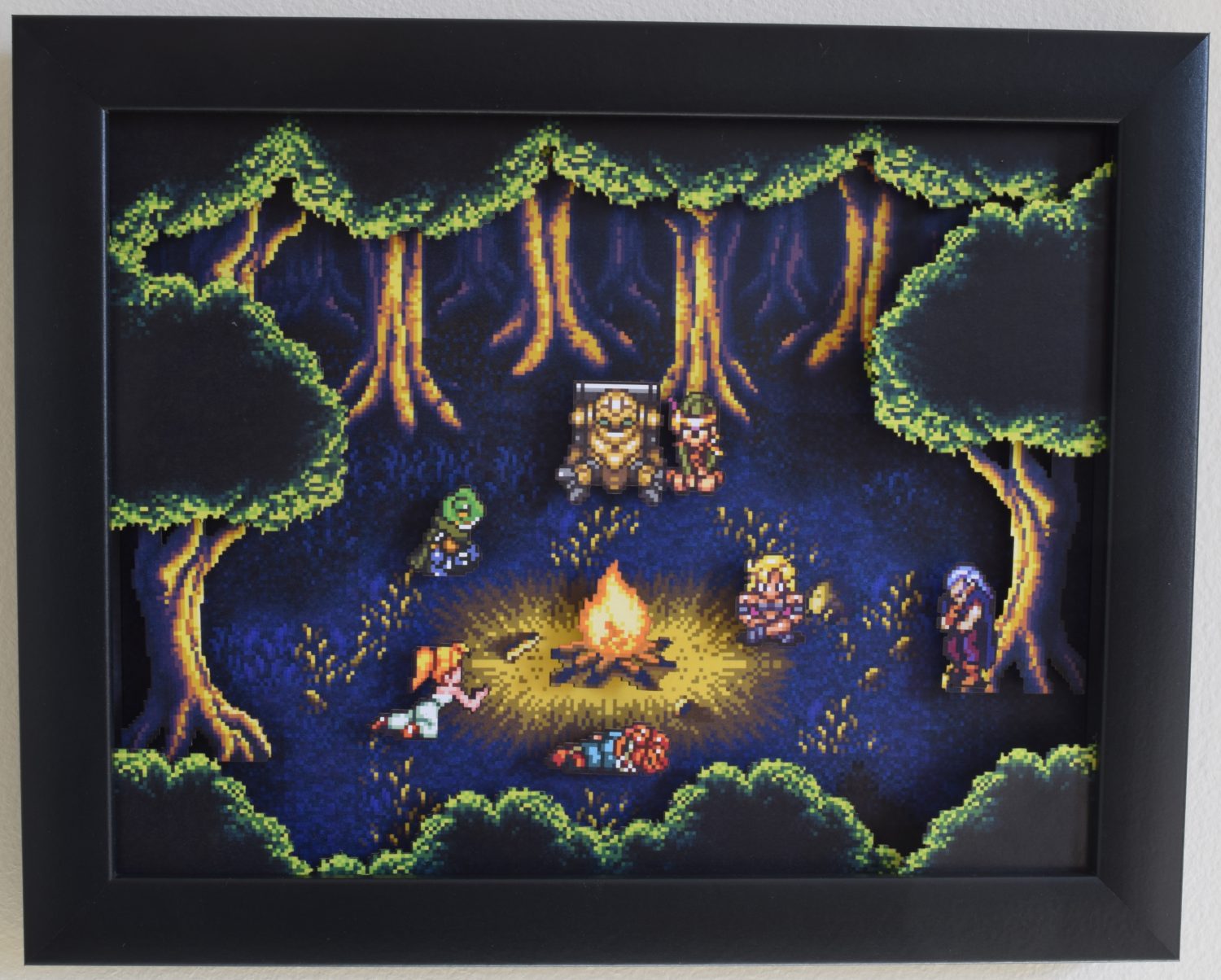 This weeks PN featured artist is the very talented Anthony DePalma. He takes his love for Nintendo and creates awesome 3D shadow boxes of iconic scenes from classic retro games. Check them out below and be sure to let us know what you think. Enjoy!

KD: Hi Anthony, can you tell our readers a little bit about yourself and what you do?

AD: Hi Kaelyn, thanks for having me! I am a computer programmer by trade, but video games have always been a big part of my life. My parents were very supportive and never discouraged me from playing them. In fact some of my earliest memories are from playing NES and computer games with my dad. This probably doesn’t sound like a big deal nowadays, but I grew up with friends whose parents believed that video games would rot your brain or something. I always felt lucky that I didn’t have to worry about that. I’m absolutely convinced that playing games early on led me down the path of computer science, and as a result I have never once worried about what I was going to do with my life. As you can imagine, I’m very grateful for that!

KD: How did you get into creating shadow boxes?

AD: I’ve always loved video game artwork because it was tied to so many fun memories with my friends and family. I used to draw my favorite characters as a kid, but the more I got into computer science the more difficult it became to draw anything. After a while I gave up on the creative aspect and started building fan sites for video games. Fortunately this was so long ago that even the Wayback Machine has abandoned all trace of them haha.

Later on I looked into video game development, but it was such a brutally difficult field to break into that I eventually resigned to keep video games as a hobby. Then all of a sudden I saw the Game in a Box gallery on Imgur and I was blown away by how cool they looked. I knew I would need to have them for a gaming themed man-cave, but unfortunately they weren’t for sale. But it was for the best, because all of a sudden I had an opportunity to be creative and I started prototyping my own scenes shortly afterwards.

KD: How long does the process take on average when you’re making a shadow box?

AD: That’s a really hard question to answer because I can never do an entire scene in one sitting. It might take me days of searching to find the perfect scenes or sprites, and then it might take weeks for the prints to come in. In my prototyping days I used an exacto knife to cut out the sprites, but that took hours and the end result looked a little sloppy since you are essentially cutting out individual pixels. I’ve since moved on to using a laser cutter, but even that requires a lot of work to create the templates and calibrate the prints. But when all is said and done, and I have a pile of perfectly cut sprites and foam in front of me, it takes about an hour to assemble the scene.

KD: I really like how each piece looks like a screenshot straight from the games. How do you decide which scene to recreate?

AD: Thank you! I always choose a screenshot as a canvas because I want the shadow box to match the aspect ratio of the game, so it feels like the scene was transferred directly onto the wall. But finding that scene is either the easiest thing in the world or something that drives me crazy for days. For example, some scenes are so iconic that they essentially find me, like The Master Sword from Zelda or The Courtroom from Chrono Trigger. Not only are they visually beautiful in their own right, but they pack a nostalgic punch and the depth from the shadow box is just icing on the cake.

On the other hand, some games are so memorable as a whole that it can be really difficult to pick a single scene to represent the entire game. I had a really hard time with The Secret Of Mana because I love so many places in the game. In the end its always a trade-off between the emotional impact of a scene and how well the scene translates to a shadow box. For example, the Blizzard Buffalo scene from Mega Man X3 was primarily a visual choice. It just looks so cool in three dimensions!

Finally, there are some scenes that I artificially manufacture with resources extracted from the game, like The Chozo in Super Metroid. I would hope that people will forgive some creative liberties taken in order to capture something special from a game.

KD: What’s your favorite Nintendo game or series? (Why?)

AD: Why must you make me choose? I’d have to say that my favorite game of all time is The Secret of Mana. Back in the 90s, I got a Super Nintendo for Christmas, which essentially ruined all future Christmases. Then in March, NJ got hit with ‘The Storm of the Century’, which dumped so much snow on my town that school was closed for a week straight. I spent the entire week sledding, drinking hot cocoa, and playing Secret of Mana with my neighbors. As a kid it doesn’t get much better than that! I’m in my 30s now but every year a few of my buddies come over in the wintertime and marathon the game in one sitting, couch co-op style.

KD: Do you dabble in any other forms of art?

AD: I wish I could! Unfortunately my brain is hardwired for logic so that limits my creative endeavors. Outside of shadow boxes, the closest thing I have to artwork is writing code. Its not really a visual medium but there is definitely an art to it. I wonder if there is some kind of latent similarity between organizing lines of code and organizing sprites into shadow boxes. Who knows!

KD: I was excited to feature you on the site because I rarely ever get stuff like this. So thanks for taking the time to talk to us Anthony. Where can our readers checkout more of your artwork or purchase some if they’re interested?

AD: Thank you so much for having me, I can talk about retrogaming all day! I have a shop on Etsy with all my shadow boxes for sale at www.videogameshadowbox.com, including some personalized scenes for wedding or anniversary gifts. I’m always thinking about new scenes, so feel free to follow me on Twitter for updates at https://twitter.com/VGameShadowBox. Thanks again!

Any artist interested in having their artwork on PureNintendo.com or in PNM can contact me at Kaelyn@purenintendo.com. Submit fan art, sculptures, baked goods, comics, etc. If the theme is ‘Nintendo’ we want to see it! You could be the next Pure Nintendo featured artist! Also to see artwork from artists featured in our magazine, PNM, please head to PureNintendo.com/magazine to subscribe! Thanks for reading