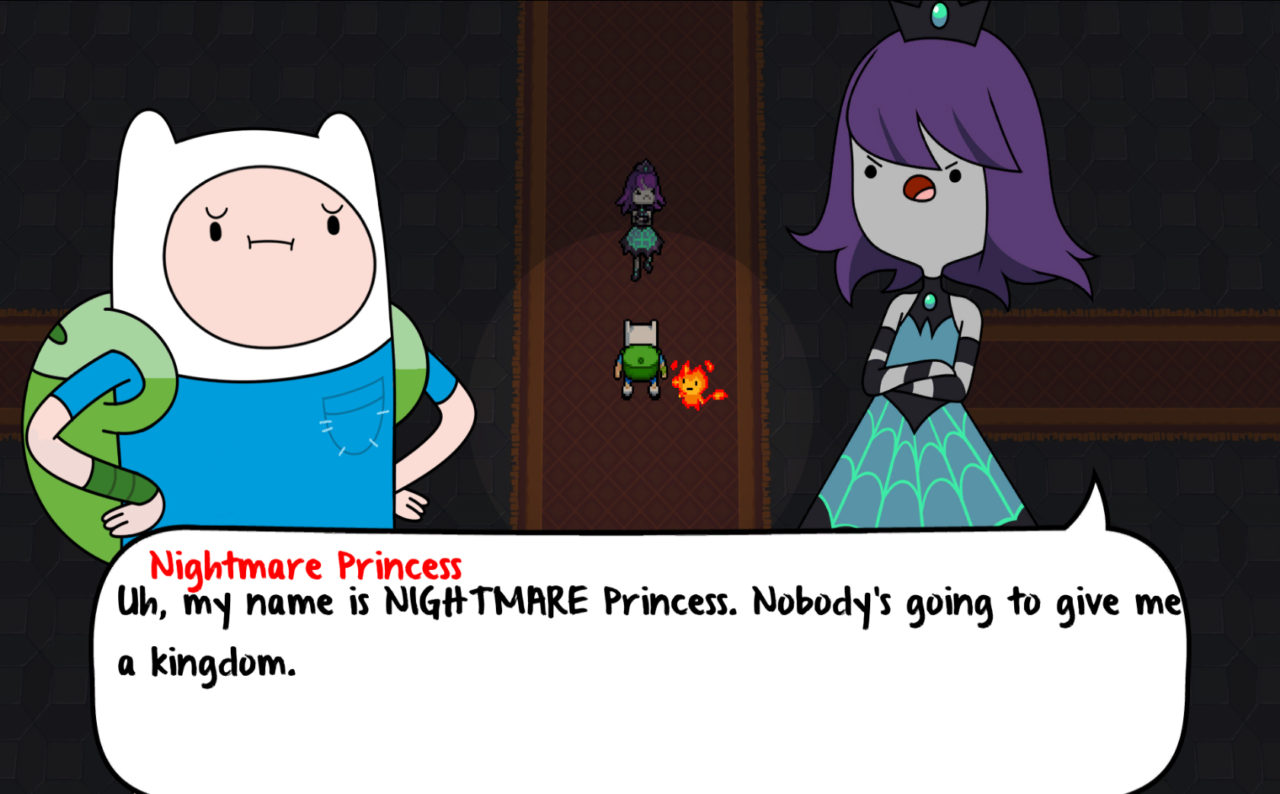 I had the wonderful opportunity to interview Ryan Rucinski, Producer at Little Orbit and Tomm Hulett, Director of WayForward about the upcoming game Adventure Time: Secret of the Nameless Kingdom.

Make sure to check out Adventure Time: Secret of the Nameless Kingdom for the 3DS on November 15th.

PN: Can you tell us a little about the story behind Adventure Time: The Secret of the Nameless Kingdom?

RR:  Finn and Jake are given an important mission from Princess Bubblegum.  PB has discovered that a neighboring land wishes to create a kingdom of their own and she send her two strongest adventurers to help them choose their own princess because, of course, you can’t have a kingdom without a princess.  However, once Finn arrives at this Nameless Kingdom he discovers that not only is his best buddy missing but that the kingdom is overrun with monsters AND the princesses kidnapped.  It is like a trifecta of bad things.

PN: Adventure Time gameplay really has a Zelda-like feel, with the top down adventure style. Was this purposeful or am I crazy? How would you explain the gameplay style?

RR:  Hey! Listen! You aren’t crazy!  We took a lot of our inspiration from the Zelda series including the camera viewpoint and a bit of the difficulty.  WayForward (the developer), Little Orbit, and Cartoon Network all got together and had a meeting with the show creator, Pendleton Ward, and he cut right to the chase in that he wanted a Zelda game.  I believe we paused for about .5 seconds before everybody was excitedly speaking about how awesome that would be to take this great license and match it to the action/RPG genre.

PN: How does the story fit into the Adventure Time Universe?

RR: The story takes place towards the end of Season 5 of the show where Finn is still using the Grass Sword but prior to heading to the Citadel.  Many of the shows characters make an appearance in the game but they are mostly secondary elements or side-quests as we wanted to focus on the new characters that we created.

While it is a brand new story, in a brand new land, with new characters, we wanted to make sure that we were isolated enough so that we wouldn’t step on any of the canon from the show but if they wanted to use any elements of the game that they could be easily dropped into the show.

PN: Were there any difficulties working on such a popular established franchise? Adventure Time fans can be rough.

RR:  Actually, there were very few mandates from Cartoon Network and the show creators.  From the beginning they were totally steering us in the right direction, and if we ever had any questions on whether there was something we could or couldn’t do they let us know quickly.

The fans are actually very supportive and respectful of the game concept and only suggest that we not have another dungeon grind,, which I can understand and agree with.

PN: On the opposite side: Being that this is your third Adventure Time game (WayForward) – What have you learned that works and doesn’t work for Adventure Time fans?

TH: We’ve tried to take the best elements of the previous two games and build Nameless Kingdom around that feedback. With “Hey Ice King”, people really liked the quest-based structure and the story that unfolded as you visited new areas. However, they wanted voice acting and more of a challenge, in a much longer game. So in “Explore the Dungeon” we made a more challenge-based game (with tons of voice acting!) but they didn’t really like how grinddy and repetitive the structure was; a lot of players never got to see all the fanservice we sprinkled throughout the game.

So with “Nameless Kingdom”, the quest-based story and gameplay are back! Plus voice acting, challenge, and mind-bending puzzles. We think this is the Adventure Time game that fans have clamored for since “Ice King” was first announced. We have a lot of funny surprises to hopefully capture the random nature of Adventure Time!

PN: How closely, if at all, did Cartoon Network work with you on these games?

RR:  We worked very close with Cartoon Network.  They even invited us to their offices and showed us unreleased art, showed us story outlines (Yes, I know some future events of Adventure Time, muahahaha!) and were an overall treat to work with.  Everything we put into the game from voice over, to concept art, to the music and story, had to be approved by them and they turned that around fast.

PN: What went into the decision to bring Adventure Time: The Secret of the Nameless Kingdom to the 3DS eShop and not the Wii U? (Note: Coming to Xbox and PlayStation)

RR: When developing a title that is part of a franchise it is important to look at the reception and anticipation on previous platforms the game has launched on.  The 3DS has been a very popular platform for the Adventure Time series of games, so it was a no brainer to bring Secret of the Nameless Kingdom to 3DS gamers.

PN: In your opinion, What makes the Adventure Time franchise so popular for all ages?

RR:  Well, I can’t speak for everyone but I like it because Adventure Time reminds me of myself as a kid.  Not as if I were Finn but more along the lines of when I was young and playing AD&D with my friends, rolling dice, slaying monsters, getting treasures and XP.  Sometimes things happen in the show that we had played out in one of our sessions and other times I remember certain things from our session that I could envision happening in the show (us, “For Tyr!” monsters, “Kill the Tyrists!”).  It’s relatable.

PN: Something I always end my interviews with. In five words, why should someone pickup Adventure Time: The Secret of the Nameless Kingdom?