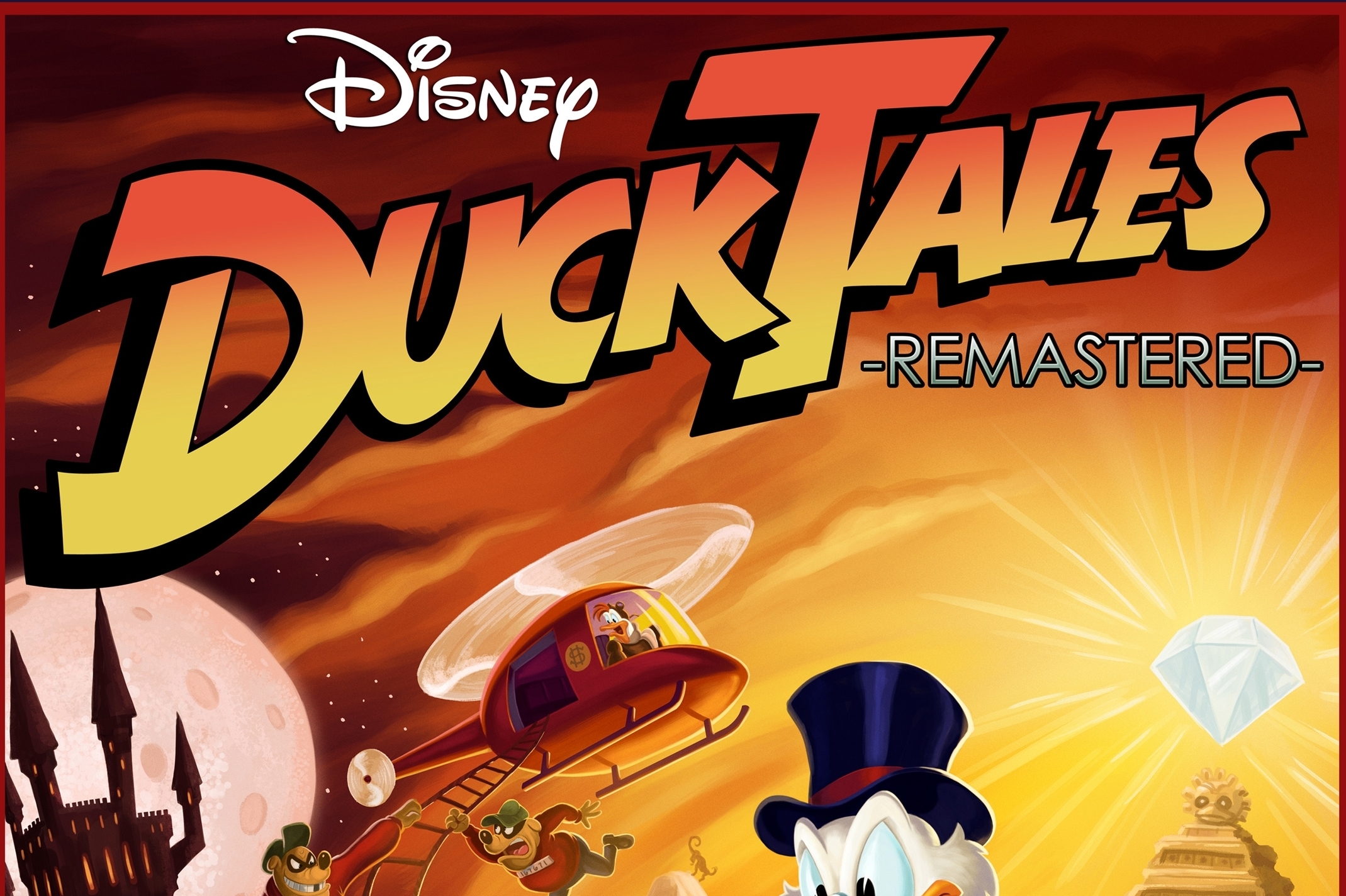 EIC note – We were lucky enough to not just have one interview, but two interviews, for Ducktales: Remastered. This one features the game Director Austin Ivansmith. Check out the first interview HERE.

Following the release of DuckTales Remastered for the Wii U, the game’s Director, Austin Ivansmith was kind enough to answer some questions regarding the development of the title, working with such an iconic series, and just how his team at WayForward went about “Rewriting History”.

Tom: The original DuckTales for the NES holds a special, intimate place in the hearts of many gamers. Was Remastering DuckTales without upsetting fans of the original (yourselves included of course) intimidating in any way?

Austin: There was definitely a bit of pressure in not wanting to upset the balance of ruining the classic NES DuckTales game, but only a bit of pressure because we never set out to replace the original game. It was always our intention to make something that stood on its own apart from the NES title, not to say that the NES version was wrong and this is the version that people need to play instead. And the other relief of pressure was simply being huge fans of DuckTales ourselves. We felt that if we weren’t upset with any of the changes then a majority of like minded classic gamers would feel the same, and I believe we were successful in that regard. If you aren’t intimidated to do your work in some regard then you aren’t being challenged at all, and I probably wouldn’t be doing my job if there wasn’t some kind of pressure, because otherwise it would become boring and lifeless.

Tom: I understand that the game’s musician, Jake Kaufman was just as apprehensive about working with such iconic tunes. What was his methodology when it came to giving DuckTales Remastered a fresh soundtrack?

Austin: Jake is a genius, a master, and his own worst critic. Any nerves he was feeling he put on himself because he takes his work very seriously and wants every song he makes to be the best it can be, like many great artists do. The way Jake tells it he has actually written new arrangements for the songs in the game when he was 10 years old, and has always known in his head what newer versions of these classic songs would sound like. It was a matter of getting to the root of the original song’s style. For example, he always knew the African Mines was a James Brown style jam. But with something like Transylvania what he previously wanted to do didn’t stop him from adding a little dubstep flair, mostly subtly, to the mix. Every single song he wrote for the game was perfect on the first take, in my opinion, but that didn’t stop Jake from taking a few more passes at perfecting the songs. Getting a music delivery from Jake is like opening a birthday present every time.

Tom: The Studio’s love of the subject matter shines throughout DuckTales Remastered, from the aforementioned soundtrack to the lovingly crafted hand-drawn art featured in the game. It’s no secret that your studio is influenced by, and are huge fans of Disney. What was it like creating artwork based directly on the Disney animated world and the work of the great Carl Barks?

Austin: I think “surreal” is a bit of an understatement in this case. There is no shortage of amazing work to reference in the DuckTales universe, and in going back we discovered some really amazing character designs, animations, and stories that truly stand the test of time. The majority of the developers on the project were more familiar with the TV show than the original Barks and Rosa comics, and most of the DuckTales audience is the same, so we leaned toward building off the style of the show more than the comics. And it seems to make the most sense, because in staying true to the show you are always making nods to the comics, much the way the show did. Of course there was always the pressure to be sure the characters were of top-tier Disney caliber work, but our artists did such an amazing job early on the only pressure was to keep that momentum going the entire time.

Tom: Keeping DuckTales faithful to the original yet inviting to newcomers must have been a challenge. What were some of the more difficult hurdles involved? Did you find that the changing attitudes of modern gamers and the style of games they have become used to had any impact on how you approached such a traditional game?

Austin: The original NES DuckTales game stands on its own and represents a real slice of what games were like back in 1989. There was still a focus on making the home experience similar to the arcade, forcing challenge on the player to rush through the title, get a high score, and not die. Some of those things hold up less well than others, and we wanted to pick and choose the elements that strongly represent the best of what the game has to offer, and pull the things which don’t mesh with current gaming conventions. The hardest thing about making this game is knowing that there is no right answer for anything. We pulled the timer, but what if people want the challenge of finishing a level fast? We kept the 1ups in the same spots as the NES game, but what if people need more lives? We added more heart containers to the medium difficulty mode, but what if some players find it too easy with 8 total hearts? During development we were worried that we were changing too much, but some players feel the game is harder because we kept enemies and item locations the same. You can never really know with absolute certainty what the right answer is, and sometimes there is no right answer that will work for everyone. To some degree the NES game is a little more non-traditional than your Mario or Sonic titles that everyone seems to remember so much more lovingly, so playing this game is a reminder of the variety of platformers we had twenty years ago. In the end I think we struck a really good balance and a ton of gamers agree with us, so in my mind this version of the game is the best it could possibly be.

Tom: We know that the decision to add in Cutscenes led to the cast of the original Television Series lending their voices to the game, such as the fantastic Alan Young who voices Scrooge McDuck. How was it working with some of the voices that you’d grown up listening to throughout your childhood?

Austin: Well the original NES title also had these character interactions, and those, more than anything, influenced us to put in these character exchanges into the game (in fact it is what inspired us to have the nephews kidnapped in Transylvania, just like Huey was in the NES version.) It was mind-blowing that Disney went to the effort of bringing the cast back because it adds such an amazing layer of authenticity to the title. To this day it feels like a dream that we got to meet June Foray, Frank Welker, Russi Taylor, Terence McGovern, Chuck McCann, and of course Alan Young. Every single actor had nothing but amazing things to say about their experiences working on the show back in the 80s, and about each other as the original show had been recorded ensemble (where most shows today every actor is recorded separately, like this game was.) They didn’t seem to skip a beat getting back into character, and after a few lines a few actors were jubilant at all the nostalgia even they were experiencing. You know it’s something special when the actors have as much nostalgia and love for something as you do as a fan. Simply incredible, it’s all you can say.

Tom: The Capcom library has a whole host of other classic platformers that fans would love to see WayForward give the HD treatment. With your studio having such a close working relationship with Capcom, do you have a desire to revamp any of their other retro gems? Finally, in relation to other possible Remakes, I can’t be the only one hoping for DuckTales 2 Remastered? Is there any chance of us seeing Scrooge kicking some butt in his native Scotland once again?

Austin: We have a passion to revamp any classic franchise, with Capcom or with anyone else who wants to do a classic game with us. We pride ourselves on being able to bring out a truly classic feel in any games we make, and there are so many great titles from years past that, with just a little coat of paint and some modern tuning, could open themselves up to a whole new audience. But we will have to wait to see how DuckTales does to know if this is something fans want. If it sells well then it’s a sign to publishers clearly showing what fans want more of, in addition to all the amazing games out there now, we want to relive these amazing games that might otherwise be forgotten. Whether it’s through a re-release like we see on Nintendo’s Virtual Console, or through an expanded remake like DuckTales Remastered, fans want to relive this nostalgia and feel like a kid again and I hope a lot of publishers and license holders take note and give more great developers the opportunity to make more fans happy.

Tom: Thank you for your time and congratulations with the game!

Tom and the rest of the team at Pure Nintendo would like to thank Austin Ivansmith from WayForward for taking the time out to answer our questions. DuckTales Remastered is available now for the Wii U via the Nintendo eShop.