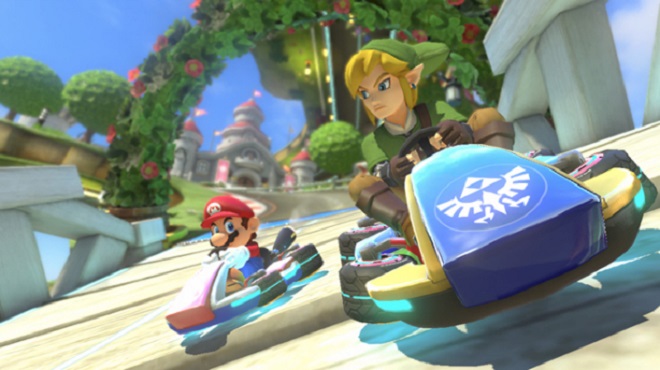 As most avid Mario Kart fans would know by now, Nintendo’s first paid downloadable content (DLC) for Mario Kart 8 was released last weekend. We’ve had a few days to play through the pack, which contains eight new courses, three new characters and four new vehicles to try out. And it’s nothing short of brilliant.

Mario Kart 8, released in May 2014, was very well-received at the time, scoring a generous 9/10 from our review and receiving praise by fans for its fresh new directions in video capturing, online tournaments and anti-gravity mechanics.

Now the innovations continue with the first of two planned DLC packs, the first of its kind in a Mario Kart game. This pack is called The Legend of Zelda X Mario Kart 8, and comes with a plethora of new goodies to try, including three new characters, two completely new cups containing four tracks each, plus four vehicles and a couple of other vehicle parts.

Along with all new tracks comes three characters to choose from. Tanooki Mario and Cat Peach are special versions of our favorite plumber and princess, both making their Mario Kart debuts. But it’s Link from The Legend of Zelda series who makes the biggest impression with this pack, as the first non-Mario character to appear in the series. Whilst some fans find this move controversial and against the principles of the game, it is the basis of this pack, a cross-over of sorts that’s meant to be something special and unique in addition to the regular game. Think of Link as a special guest in Mario’s game, rather than an intruder.

Using Link is an absolute blast, it’s actually refreshing to see someone new and Link looks as though he’s really enjoying himself – he punches the air after winning a race and thrusts his sword into the air after performing stunts. He looks very comfortable behind the wheel and also very determined to win.

Not since the retro cups first appeared in Mario Kart DS have we had any deviation from the standard set of cups in a Mario Kart title. Now we have two new cups in our midst: the Egg Cup and the Triforce Cup. Each one contains the usual four tracks, but with a mixture of five new and three retro tracks overall. Let’s go over each track:

Let’s not forget the new vehicles that come with this pack:

The pack comes at a price of $7.99, which is reasonable for the amount and quality of content provided. If it was just tracks, or just characters, it would feel a little shallow, but with so much to try out, it’s really like receiving a new mini-Mario Kart game in itself. It gets even better if you download pack 1 and 2 together for $11.99 (or pre-order pack 2 since it won’t be out until May 2015).

If you’re a Mario Kart fan, you will love this pack and if you haven’t already, go and download it now. This pack contains the perfect amount of new content to reinvigorate your karting experience after 6 months of play on the original. The new tracks are fresh, fast and fun, mixing new and old elements into something as memorable as the best classic Mario Kart tracks. Link is a special edition and takes the karting experience beyond the Mario universe to add even more variety and fun to the mix.

Check out all the info on Mario Kart’s DLC on the official Mario Kart 8 website.