Armed with a unique grappling arm, Rad Spencer sets off on a daring rescue mission in this classic action side scroller.  A reimagining of the popular NES version, Bionic Commando on the Game Boy retains its gameplay while having more of a sci-fi feel to it.  Is this bio-tech adventure worth taking on the small handheld screen?

If you’ve never played the NES version, it will probably take a fair amount of time to get comfortable with the bionic grappling arm.  With no jumping mechanic it’s the sole means to navigate platforms!  While difficult initially, the unique feel is a grower.  Once you get the swinging down it really is quite entertaining scaling the vertical oriented zones. 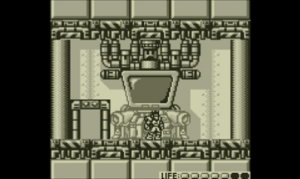 Its predecessor had a distinct late 80’s military setting, but this Bionic Commando is sci-fi in tone.  The backgrounds you traverse past and the defense systems you’re on guard against are more futuristic in nature.  Computer technology seems to come to the fore more often as well.  The visuals have an almost anime style, and overall it’s just a different feel.  The game is the better for it however, and it makes this entry stand out. 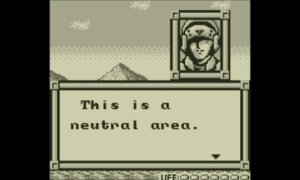 The plot plays out through numerous communications rooms where you can chat with your home base and intercept enemy communications.  Various neutral areas let you learn more while also providing a refreshing break from the action.  Everything flows rather nicely as you try to find agent Super Joe and learn more of the mysterious Albatross project. 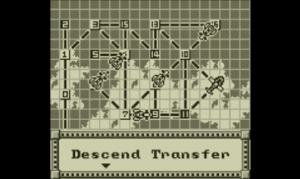 This game is plenty challenging.  Besides adjusting to the controls, the map is large with no set path.  You can often encounter battles in between zones.  The layouts throughout are a maze like and it’s quite easy to get confused on the small screen.  Thankfully sharper 3DS visuals and restore points make the game a superior handheld fit on the Virtual Console than it was on the GB.  It also beats having to jot down numerous passwords.

One easy tip to help make the challenge manageable – read the manual.  Your items such as protectors, tools, and video receivers are shown as small icons which can be tough to discern in the early goings.  Familiarizing yourself with them and picking up background details can eliminate much needless frustration.  Another tip is try hard to earn continues.  They’re limited to start, but earning more through good play provides a good safety net. 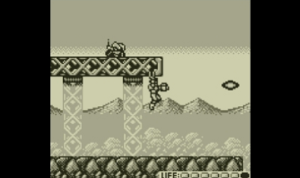 The Game Boy version of Bionic Commando has several things in its favor, even for those of us who originally missed it.  While I maintain it still feels slightly misplaced on the GB, it is a quality release nonetheless. Bionic Commando should appeal to fans of the NES version, or anyone who desires to “swing into action against the forces of evil”.

Bionic Commando should appeal to fans of the NES version, or anyone who desires to “swing into action against the forces of evil”.