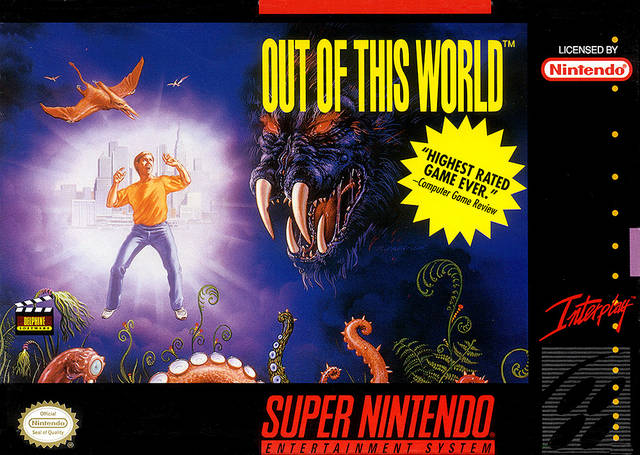 Retro Review: Out of This World (SNES)

There are countless hidden gems out there in the gaming world. We either hear about these games from word of mouth or by simply taking a chance on a random title. I recently had the chance to pick up one of these gems entitled “Out of This World” for the SNES and boy was I in for a surprise.

I’ve heard about this game prior to picking it up and have heard some pretty decent things about it. After looking up this game, it seems as though it has a bit of a cult following in terms of popularity. The game opens up with the main character Lester teleporting into a body of water where I waited patiently for what I thought was an opening cinematic to end, only to find out that I died from the underwater tentacles that dragged me to my watery grave. You know you’re great at video games when you die within the first five seconds.

But it was nothing to be upset over. Besides, this would be the first of many in game deaths, as everything in this mysterious world wants you dead. In fact if I could describe this game in the form of a made up genre it would be “trial by error”. 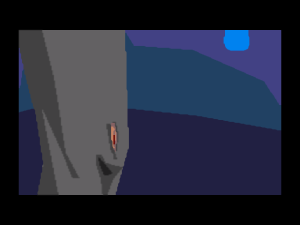 Tis but a scratch! (Fun Fact: This can kill you.)

Out of This World is a puzzle platformer that plays similar to that of the original Prince of Persia, a lot of moments will cause you to take leaps of faith in order to learn how to advance through the game. You may die quite a few times, but when you do figure out the games puzzles, it not only feels rewarding, but also the solution will be branded in your mind for good.

Like previously mentioned, Out of This World really doesn’t tell you anything in terms of how to advance through certain areas of the game. From disabling security systems, destroying walls, to operating an alien tank that contains no owner’s manual must be figured out on your own. In fact I want to talk about that tank situation. At one point, I found myself in a well-armored vehicle that was constantly being shot and bombarded. A small panel of buttons came up and like any 24-year-old man, I pushed as many buttons as my inner child would allow. I kept saying things out loud like “Well that didn’t work”, “Nope those are the lights and the wipers” and my all time favorite “OOO MISSLES!”  Until I hit the right combination that ejected me to temporary freedom. The moral of the story? Don’t let me near buttons. However, if we’re in a life or death situation…don’t let me near buttons. It’s for the best. 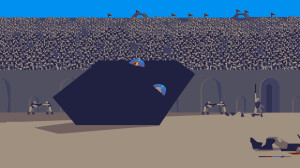 They see me rollin. They ha—whats this button do?

But it was that incredible lack of knowledge that really immersed me the gamer into the experience. It was like the game was telling me “Lester certainly didn’t know what to expect when he was teleported to this world so why should you”?

When it comes to the games visuals, it’s absolutely astounding. Out of This World looks as though it’s pushing the SNES to its limits and if anything, it looks like an extremely early PS1 game. There are even well done cut scenes, which at the time of the SNES seemed like something unheard of and this was made in 1992. I can only imagine what this game would have been capable of if given the use of the Super FX chip which helped enhanced the use of polygon graphics back in the SNES days.

In the end, Out of This World is a very interesting game that may appeal to gamers who like figuring out things on their own, but to others who lack the patience may think otherwise. But if you’re willing to take a chance on this hidden gem, I highly recommend it. Just be prepared for many deaths and for a game that’s truly insert game title here.