A few months ago I posted a review for Revenge of the Gator, a Game Boy pinball classic that had been added to the 3DS Virtual Console.  It was developed by the folks at HAL Laboratory who went on to make another well-known GB pinball game, Kirby’s Pinball Land.  HAL’s pinball efforts weren’t just limited to Nintendo’s handheld though – they also brought it to the home console realm with this overlooked NES game, Roller Ball.

Roller Ball took advantage of the NES hardware by creating a pinball experience that no arcade could match – it was four screens tall!  Nowadays it isn’t uncommon to see video pinball with exaggerated tables like that, but back in the 80’s this was quite the novelty.  It allowed for a longer playing session as well, something gamers (accustomed to having quarters quickly eaten by arcade machines) could really appreciate. 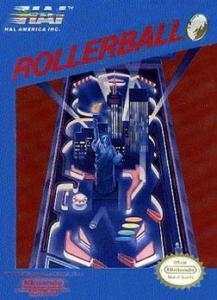 The visuals are fairly reflective of what middle of the road NES games were producing at the time.  Certainly not the greatest graphics (it is only pinball after all) but definitely not bad.  You’ll see the Statue of Liberty and the Empire State building during play, which are fun visual highlights.  Meanwhile the musical tracks remind me of why I’m so fond of NES chiptunes!  The catchy melodies trigger some happy recollections.

Roller Ball offers simultaneous two player gaming!  The match game isn’t as good as the main one granted, but there’s something to be said for offering this feature during the NES era.  We were used to passing the controller back and forth in those early days, so simultaneous play was a big selling point.

With plenty of scattered targets to hit and lots of ways to earn bonuses (like extra turns) Roller Ball does everything you’d expect a good pinball game of its time to do.  It might even do some things you wouldn’t expect from a game its age.  I think of multiball as one such example – sure it’s a standard feature to count on now, but one that was very welcome in the 80’s.

Here is an interesting fact that you may not know – Satoru Iwata served as a producer for this game!  Roller Ball is an early title he worked on during his days with HAL, and his first as a producer. 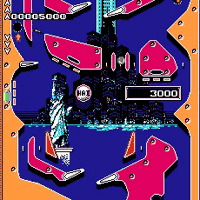 Roller Ball compares fairly well with the best NES pinball games.  It’s true it doesn’t have the nostalgia of Nintendo’s own launch window classic, Pinball.  It’s also missing the arcade heritage of the impressive Pinbot.  Nevertheless, I think it’s of comparable quality – and probably better in a couple of ways.  There isn’t a great deal more I can really say (again, it’s just pinball).  If you are a fan of video pinball like me, this game would make a very good addition to your NES library.  I’d like to see this game come to the Virtual Console at some point, and joins its handheld cousins to complete the HAL Nintendo pinball trilogy!