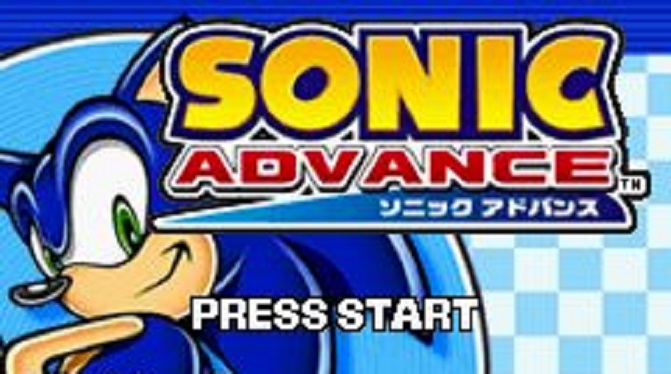 Seeing Sonic Advance arrive on the GBA in early 2002 was somewhat surreal.  Not only was the 16-bit rivalry between Nintendo and SEGA still fresh in players minds, but the last Dreamcast game hadn’t even hit the shelves yet!  Times were changing though, and for Nintendo fans it was a good thing – Sonic Advance was (and still is) a GBA gem!

You’re given four playable characters in Sonic Advance – speedy Sonic, flying Tails, climbing Knuckles, and hammering Amy – to try to defeat Dr. Robotnik (Eggman) once again.  You’ll travel across a variety of fun locales such as the bright beaches of the Neo Green Hill Zone, the sky lit Casino Paradise Zone, and beyond.  It’s familiar fun, yet still felt fresh on the handheld screen. 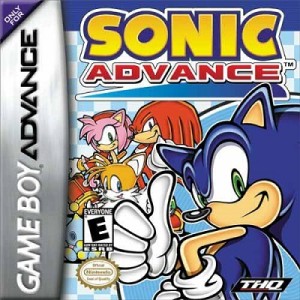 Sonic Advance has a terrific balance of both platforming and speed.  There are times in the game (especially later on) where genuine platforming skill’s needed.  Yet there’s still plenty of fast-moving action to enjoy.  While later games (like Sonic’s DS début, Sonic Rush) had more emphasis on an almost roller coaster, fly by the seat of your pants type play, Sonic Advance still felt like a Genesis game.  He was a bit more zoomed to give his GBA début a unique feel, but this was still a Sonic platformer proper.

As a true platofrmer, Sonic Advance could be enjoyed through the fun of exploring for secrets, trying to rescue as many friends as possible, etc. Looking for alternate routes was also a treat, and a task well suited to having four unique playable characters.  Nevertheless Sonic didn’t lose his trademark speed – if you wanted to buzz through each zone, never taking your hand off the d-pad in an effort to finish in record time, you could. 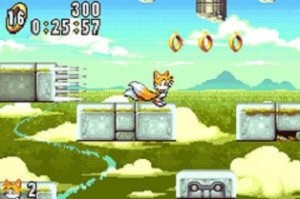 Special stages are always noteworthy in Sonic games, and Sonic Advance is no exception.  The cosmic levels are reached via springs in the upper ends of the zones, and just reaching them was a challenge in itself, never mind doing well enough to get a Chaos emerald.

Sonic Advance offers a wonderful audio/visual package!  The timeless soundtrack is absolutely brilliant – It’s bursting at the seams with catchy tunes.  The music for each zone actually changes between acts!  For example, the Ice Mountain Zone starts off with a nice gentle tune before transitioning into a determined one.  So much variety, and all easy to appreciate by going to sound test in the options – you can listen to each song of the brilliant soundtrack in full at your leisure.  The graphics meanwhile are very bright, super colorful, and loaded with lots of details.  It’s the little touches (like clouds scrolling by in the Angel Island zones for instance) that I appreciate, even to this day.  The large size of the zones also allowed for a great deal of diversity.  The visual leap from the GBC was huge!  Graphics like these represent a great kind of nostalgia. 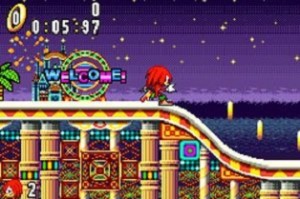 Extras include a time attack (recording fastest clear times for each zone) both competitive and co-op multiplayer support, and the ability to transfer Chao with the GC/GBA cable to Sonic Adventure DX: Director’s Cut and Sonic Adventure 2: Battle – the latter which had released just days before Sonic Advance.

I didn’t have too many complaints with Sonic Advance when I first played it years ago, and time has added few.  Some might say the game has little new to offer – certainly the levels are based on themes seen in prior titles.  Those arguments however are missing the point – Sonic Advance was a celebration of the series!  It’s a love letter from Sonic Team to the Nintendo fans that (due to console loyalty) never played a classic Sonic game. 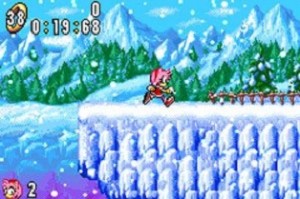 Sonic Advance might be shorter and on the easier side when compared to some other Sonic titles, but it’s the sort of game you’ll enjoy beating over and over again – I have!  Certainly beating it with every character ups the length considerably, as does the challenge of getting all seven Chaos emeralds

The success of Sonic Advance can be seen in many ways – through its critical acclaim, its high sale figures, subsequent re-releases and ports, and by spawning two direct sequels.  Everybody seemed to love Sonic on Nintendo’s handheld – the same can still be said to be true all these years later. 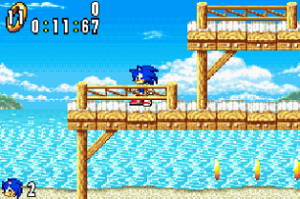 Given SEGA’s long standing and continued relationship with Nintendo, and the fact that Sonic games have always sold well on Nintendo hardware, I’d be shocked if this game didn’t show up on the 3DS courtesy of the GBA Virtual Console.  When that day comes, buy it!