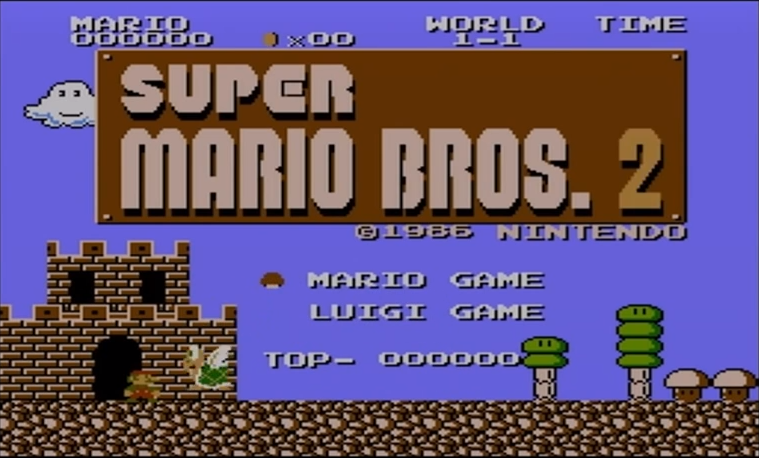 Recently, Nintendo released “Super Mario Bros. 2″ on the Wii U Virtual Console, which is popularly known in the U.S. as “Super Mario Bros. The Lost Levels”. First, a little history lesson about this game. After the booming success of Super Mario Bros., Nintendo was already hard at work on producing a sequel. However, Nintendo of America at the time deemed the newly made SMB2, to difficult and worried that it would push gamers away rather than bring them in. Then enter the U.S. version of SMB2, which in the end was just a version of a Famicom game by the name of Doki Doki Panic with the Mario gang replacing the main characters. Years later, the Super Mario All-stars pack was released for the Super Nintendo. I still have fond memories receiving this title and replaying those classic Mario adventures. It came to me as a shock when I saw the game “The Lost Levels”. What was this game? How did I miss it? The title alone filled me with excitement and I immediately dove in…little did I know what I was getting myself into. Join me wont you, as we traverse the Lost Levels. Just don’t take any Warp Pipes along the way. Trust me.

More Than Just A Color Swap

When it comes to gameplay, there’s nothing to different that pervious Mario veterans will miss. Go from left to right, reach the goal and find the Princess in another castle. But that doesn’t mean that there aren’t at least a few new tricks along the way.

Starting off, players will notice that they can choose between a “Mario Game” or “Luigi Game”. In the previous game, playing as either Mario or Luigi just involved different colored overalls. This time however, the game has changed. Choosing a Mario game will give you the same control mechanics veterans experienced in the previous installment. Nothing new here. But lets say you want to take Luigi for a spin? Right off the bat, players will notice the difference between the two is Luigi’s superior jumping ability helping him get to the highest of platforms and traverse the widest gaps with relative ease. But theres a catch. Stopping on a dime is not this younger brothers forte, as you may have a hard time controlling his slippery movement. Luigi is considered the “Hard Mode” of this game and is reserved for the most advanced of players.

One Poisonous Mushroom Ruins The Bunch

When you play any Mario game, chances are you instinctively grab any mushroom the second you see it. You might want to look before you leap when playing The Lost Levels, as the developers added in a new shroom to the mix. Enter the Poisonous Shroom, the false sense of hope. Picture this if you will. You’ve gotten pretty far in the game, you’re low on extra lives and you see a row of question blocks. Hitting one of the blocks rewards you with that oh so lovely sound that a power-up is on its way, but instead of a power-up, you get this dark colored harbinger of lies. Its like the game mocks you. “Oh! You need a power-up you say? Maybe something to take some extra damage? Awww thats cute. Here! Take some DEATH!”. When in doubt, remember this rhyme. “Black and Brown, you’re going down.” “Red and Orange, nothing rhymes with Orange.”.

There are even elemental mechanics this time around. Well ok, so maybe there’s only one, but its still one that deserves some attention. On certain levels, the wind will blow uncontrollably and can throw you off nearby platforms making simple gaps an absolute chore. The trick to this is using the wind to your advantage when clearing gaps, just keep an eye on where you’re going to land.

This last element cannot go unmentioned in this review. Warp Zones. We all remember using these in the first Super Mario Bros. It made completing the game insanely easy, especially if you knew where to find them. While Warp Zones are present this time around…you’re better off not finding them. Sure they can send you to the next world, or sometimes, they can send you back to a previous world or all the way back to the beginning of the game. It’s as though the developers didn’t want the player to rely on cheap easy tricks such as the Warp Zones and to encourage you to finish the game without them.

Speaking of finishing the game, lets talk about that! After completing the game sans Warp Zones, you’ll then be taken to World 9. There are only four levels that will continuously loop until your game is ended. You’re then taken back tot he title screen and may notice a star next to the title. Finishing the game eight consecutive times will grant players the chance to explore worlds A – D which will truly test your Mario skills. Just when you thought this game couldn’t get even more difficult, they ask you to beat it eight times in a row to truly complete it.

I’ll be honest my fellow gamers, this game is HARD. I put this game up as one of my many examples of what is considered “NES Difficult” and sadly, that difficulty may push some people away. Granted it sounds like I’ve been bashing this game throughout the review, but all in all, its still a solid Mario title. Coming from a gamer that has beaten it from 1-1 to D-4, the bragging rights alone feel fantastic. To say that you’ve beaten a game that did not receive a Western release simply due to its difficulty feels very rewarding. It’s almost like a personal test as a gamer. Can you beat a game that at one point was considered to difficult for the American market?

While revisiting The Lost Levels, I had a great time playing this challenging installment that will go down in both gaming and Mario history. If you’re up for the challenge, then I say check it out. And if you do the 1-UP trick at the beginning of the first level, I wont judge you. You’re going to need all the lives you can get.