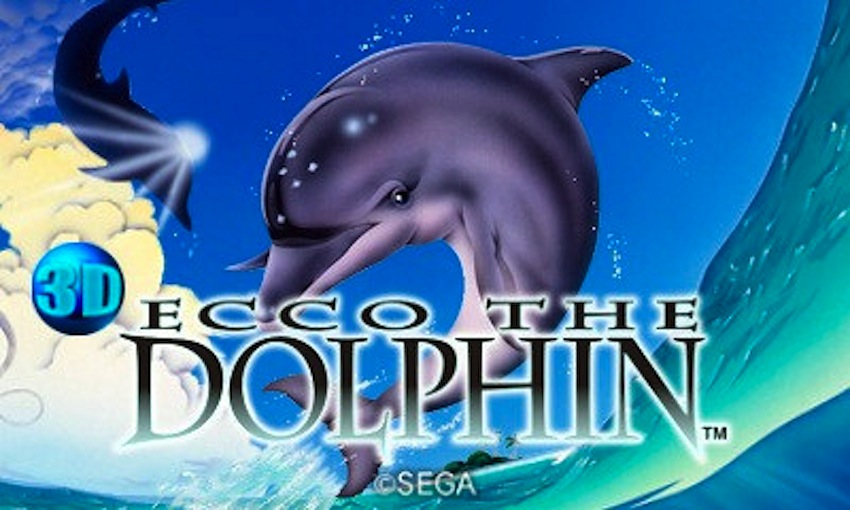 As a child, alongside the Sonic titles, one of the games I spent longest with was Ecco the Dolphin, an unusual underwater adventure from Sega where players didn’t control a Hedgehog with attitude, but instead, swam the oceans as a Bottlenose Dolphin. Some fifteen years later and my experiences with Ecco are a distant memory, an “echo” of my childhood. So naturally, when I heard that Ecco the Dolphin was one of the titles receiving a 3D upgrade in Sega’s 3D Classics for the Nintendo 3DS, I was extremely eager to relive those gaming experiences I had what seems like so long ago.

As previously touched upon, Ecco is a Dolphin, with all the peaceful compassion one would expect from such a creature, oh, except when it comes to fish, jellyfish, sharks etc. Then Ecco’s mean to the bone. The game begins with Ecco swimming happily in the ocean with his pod (a group of Dolphins) when a mysterious presence sucks Ecco’s Dolphin family (and a few unfortunate fish) out of the ocean in a multicolour blaze of evil. This sets up the aim of our game, to guide Ecco through a series of oceanic stages in order to find the truth behind his pod’s captors. 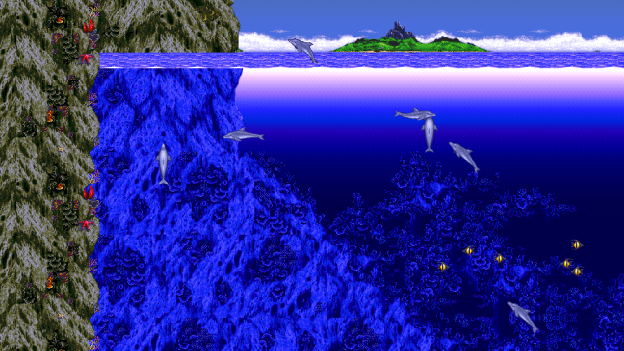 Controlling a Dolphin isn’t something gamers have to do often in video games, and for good reason. Getting around as Ecco is fairly straightforward, he/she can swim in all directions, and can do a sudden burst of speed which also acts as Ecco’s attack against the hordes of deadly underwater creatures . Unfortunately, besides the introductory stage, most of the game does not take place in open water. Ecco must instead traverse narrow mazes and catacombs. This is where the controls really suffer. Players can expect to frequently find themselves stuck on corners or hurtling into the many spiked walls. This is also problematic, as unlike in other titles, Ecco has no invulnerability after taking damage, giving no time to recover. This is a major issue, as being trapped against a spiked wall or encountering a powerful enemy such as the Octopus in Stage 2 can render you lifeless in the blink of an eye. There are also points in the game when the simplest of tasks can become unnecessarily taxing. For example, in stage 2, a shell must be pushed against a vertical pillar of rocks in order to open a path. Sounds simple. However, with Ecco not having arms, the spiny shell can only be pushed vertically up using Ecco’s nose or along the ground. Couple this with Ecco’s need to regularly resurface for air and you’re in for a long and arduous task. 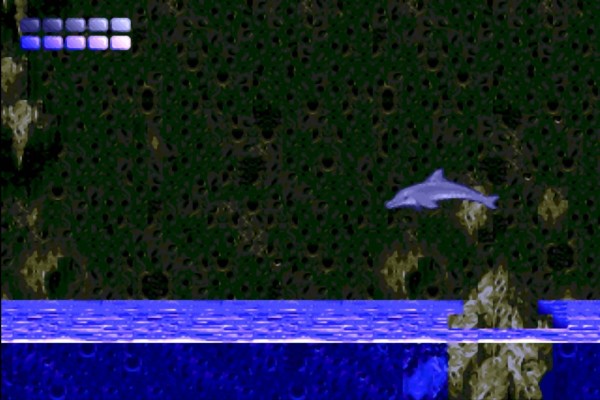 Mastering jumps like this takes some getting used to

The games lack of explanation makes for a bewildering experience, as players are quite literally thrown into the deep and expected not to drown. Progress is prevented using “key glyphs” which the players must find in order to unlock a matching glyph. Finding these can be laborious and the system is particularly unforgiving. Unlocking one glyph doesn’t keep the path open, and moving away will cause the glyph to reemerge. This wouldn’t be quite as complex if not for the fact that the glyphs are often spaced extremely far apart, meaning players will have to repeat processes unnecessarily time and time again. The games many difficult features can be somewhat eradicated by switching on “Super Dolphin Mode” from the main menu. This acts as a permanent invincibility removing damage and the requirement to resurface for air. Unfortunately, this leaves the player with the option of playing through the game simply with little satisfactory reward, or with huge difficulty. There is no middle ground.

In fairness to 3D Ecco the Dolphin, the game does have its positives. The game is as beautiful as it was back in 1992 and perfectly illustrates just what the Sega Genesis was capable of during the 16-Bit era. The ocean is vibrant and teaming with sea life and looks as good as ever on the handheld. Like 3D Sonic the Hedgehog, the game’s 3D treatment is minimal and doesn’t add a great deal to the game in terms of presentation.

No, this screenshot has not been photoshopped!

M2 have done another great job porting the game onto the 3DS and the version feels very faithful to the original. Like the other Sega 3D Classics, they have added in the ability to switch between Genesis 1 or 2 emulation, the International or Japanese version, a “Fall-In” or “Pop-Out” 3D effect, and the ability to play with an old, blurry CRT display in case the crisp 2D sprites are too sharp on your eyes. Again, some of the differences between the features aren’t very apparent and the previously mentioned “Super Dolphin Mode” must be turned on or off for the entirety of the game, meaning that you can’t cheat to bypass certain sections only.

My inner Six year old wanted to love 3D Ecco the Dolphin. Along with Sonic the Hedgehog, Ecco holds a great nostalgic spot for many children of the nineties, like myself. Unfortunately, going back to the game after all this time made the game’s weaknesses all the more apparent. The game’s awkward controls, instant difficulty and lack of direction feel even more out of place amongst today’s generation of games. Ecco the Dolphin’s style and sentiments are very representative of the decade of its release and some may argue that the game is best left there too. But overlooking the games numerous issues, Ecco the Dolphin really is a game which, at its core, is a unique experience worth checking out. Experienced gamers and those with a great deal of patience will find a title with plenty of challenge packed in. However, those who disliked Ecco the Dolphin back in the nineties will find themselves in familiar water if they return to the 3DS port and should probably steer clear of this altogether.