I regret that I never experienced SEGA’s Galaxy Force in the arcades (I don’t regret missing most of the home ports which, unsurprisingly, are said to be weak).  But even without the benefit of nostalgia, 3D Galaxy Force II won me over immediately.  Part of it is due to the After Burner type feel it has, but dare I say it … I like this game even better!

As a new recruit for the Space Federation, you’re on a mission to reclaim your solar system from the Fourth Empire.  I like how you can select which planet to start on, giving the game a less linear feel. I also appreciate the variety, as waves taking place over the wide open terrain of the planet’s surface, transition as you’re moved in place to penetrate the cramped fortress quarters.  Branching paths further add to the mix. 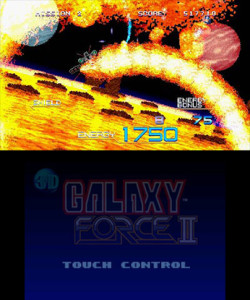 Besides the diverse enemies, the game has lots of environmental obstacles that add to the challenge.  Some of my favorites include damaging bursts of lava (erupting from both above and below) and tall dust storm cyclones.  There are also those that don’t damage you outright, but can still prove to be a hurdle, like flying through thick cloud cover.  In addition to the challenge, these provide a cool visual flair that look very good in 3D.  Speaking of …

I enjoyed the 3D effect in Space Harrier, particularly how it helped me to gauge the distance of hazards.  In Galaxy Force, the 3D is even stronger.  The separation gives a real sense of depth which I find not just helpful, but impressive, and undoubtedly others will as well.  The colorful visuals satisfy on much the same level, with any minor complaints I have simply (dizziness on mission 6) reflecting how ambitious this game was for 1988.  Like most (all?) SEGA arcade titles, it was impressive stuff for its time, and it still manages to look good today.  Screenshots don’t do the game justice – this is one you really need to see in action firsthand to truly appreciate. 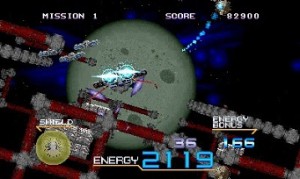 The musical tracks are quite strong here, though perhaps not as well-known or catchy as the Space Harrier tunes. Control is fine and responsive, a good thing since the ship has a fairly generous boundaries despite being constantly propelled forward.  The game even supports the Circle Pad Pro for those that use the accessory.  The multitude of options I enjoyed prior have carried over also, and it’s fun experimenting with the various settings.  It’s also necessary due to the games high level of difficulty.  There are no continues available (sadly) so the best way to counter the game’s arcade quarter munching mentality is to tweak the various settings in your favor. There’s no shame in slowing down how fast energy drains – the game still retains a fair challenge.

Galaxy Force II is a short but sweet sci-fi blast!  Once again M2 has done an astonishing job, and with their efforts is it any wonder that they’ve been receiving so much praise from critics and gamers alike!?!  This is a fun and impressive game that really surprised me, and you’ll definitely want it downloaded on your 3DS! 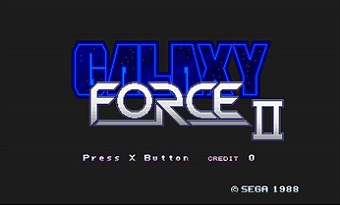