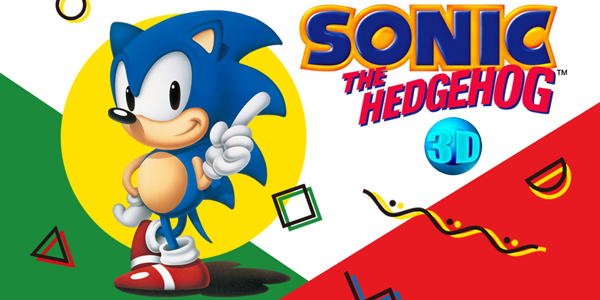 When Sega announced they’d be bringing their 3D classics range for the 3DS Virtual Console to the West a collective cheer emanated from the gaming community. What seemingly appeared to be exclusive content to Japan was finally confirmed to be making its way to our shores. Amongst the games listed to receive the 3D treatment was their blue mascot’s triumphant debut, Sonic the Hedgehog, and this time around there would be none of that phoney “3D” featured in the likes of Sonic 3D Blast. This time the blue blur would be in full Stereoscopic 3D.

There’s not much to be said about Sonic’s debut that hasn’t been said countless times before. Sonic the Hedgehog is classic platforming at its finest. Despite Sega’s marketing during the early nineties, Sonic isn’t all about speed and “blast processing”. In fact, Sonic the Hedgehog relies more on perfectly timed jumps and carefully navigating your way through each stage. More often than not, you’re punished for going too fast. Slow and steady, Sonic! Going back to a title from the 16-bit era does throw up the occasional cheap death. Too much eagerness to squeeze through a space can result in Sonic being squashed, despite the gap widening and not closing. Thankfully, moments like this are few and far between. 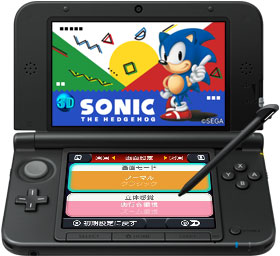 One added feature that improves the game vastly is the inclusion of Sonic’s trademark Spin Dash ability which was absent from the original Sonic the Hedgehog. In the past, going back to Sonic’s debut after playing the likes of Sonic the Hedgehog 2 or 3 always felt quite the chore due to the lack of the Spin Dash. Enemies were more difficult to speed through and Sonic’s maximum velocity took a lot longer to achieve. However, thanks to the 3DS port, the Spin Dash has been added into the game, blending Sonic 1’s gameplay mechanics more seamlessly into its two follow ups. For the purists playing, the Spin Dash is able to be turned off via the in-game settings, meaning those who wish to tackle Sonic the Hedgehog as originally intended can do so. Another neat feature for those who grew up with Sonic on the Genesis is the ability to revert the 3DS’s top screen into a CRT Television display, complete with rounded edges and not so cutting edge image quality. It’s a nice nod back to Sonic’s golden age and makes for an interesting visual style for those not wishing to play in 3D. 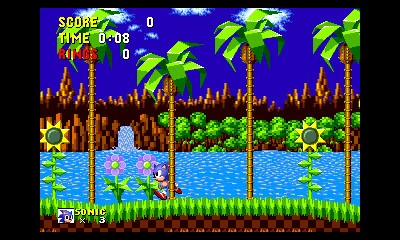 Objects such as trees now appear in front of Sonic

So how does Sonic look in 3D? Well, very similar to Sonic in 2D. The stereoscopic 3D is extremely muted and doesn’t really leap out from the screen as one may expect. This is, arguably, for the best as the Supersonic speeds from bouncing on a spring or taking a loop coupled with a strong depth of field would surely have made for quite the nauseating experience. However, for a game labelled as “3D Sonic the Hedgehog” one would expect a bigger implementation of the 3D effects. Players can choose between a “Fall-In” or “Pop-Out” 3D effect with the latter being the more extrusive, but the difference is minimal. The game instead puts focus on giving more distinction between the background and foreground layers. Objects such as trees and structures can appear in front of Sonic as well as behind him. That aside, the game still looks extremely impressive for its 22 year age. The colours are as vibrant as ever and presented on the 3DS, the game looks extremely crisp, sharp and appealing to the eye.

Being a port rather than an entire remake means that the game certainly isn’t without its flaws, many of which come about because of the games age. The game suffers from slowdown in the usual places, most notably when Sonic loses a horde of rings, and objects can occasionally flicker. Regardless of a few visual anomalies, the game is smooth and runs almost perfectly. It’s a very faithful port of the original and dedicated fans will be hard pressed to find any differences in gameplay. 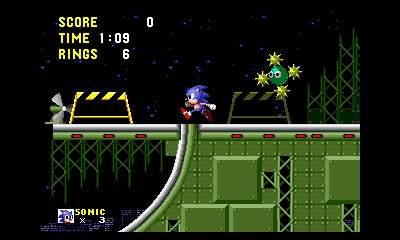 As seen in the above screen, the barriers in Star Light Zone appear in both the background and foreground

All in all, like the 16-bit Mario titles, the Genesis Sonic titles remain elite games to this day. Sonic’s debut is as radical as it was back in the nineties. Unfortunately, 3D Sonic the Hedgehog lacks some of the extra content that other recent ports have received, such as the cheaper iOS and Android version’s ability to unlock Tails or Knuckles. 3D Sonic the Hedgehog may not have added much in the way of new features, but having the blue blur’s debut on the 3DS Virtual Console may be too hard to resist for some. Despite the title being available on just about every system imaginable, the 3DS version is an extremely faithful port and makes a great addition to any Virtual Console library.